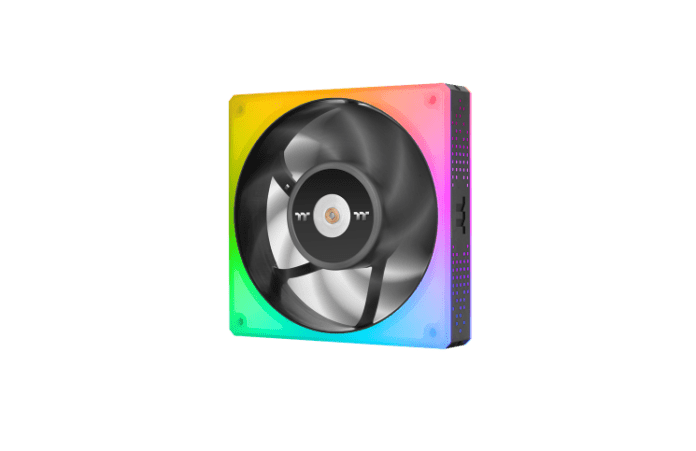 Another brand new product has graced us from Thermaltake, and once again it’s a brand new fan kit. The TOUGHFAN 12 RGB. They were first seen back in January of this year at the Tt Expo, and have finally made their way to us for today’s review… 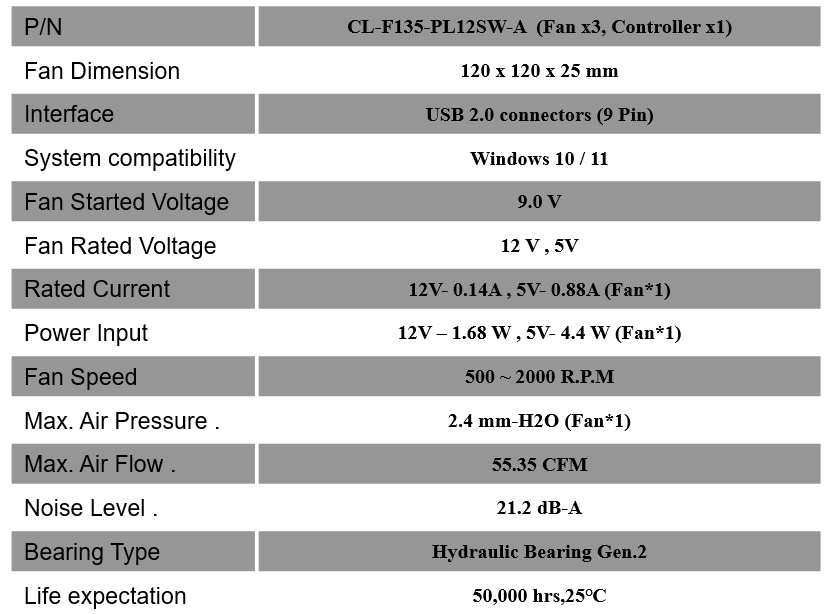 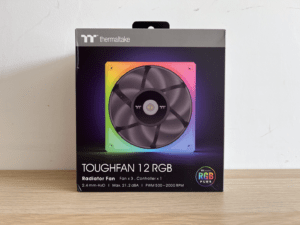 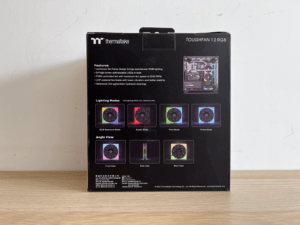 In the “typical” Tt fashion, they have packaged up the TOUGHFAN 12 RGB kit in their usual black box with a good photo of the product and highlighted selling points. Overall the box does a great job of product promotion and looks premium. More importantly, it does a great job of making sure the product itself arrives safe and sound. 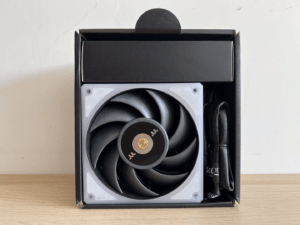 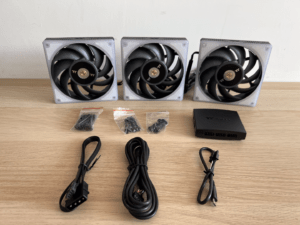 Internally, the three TOUGHFAN 12 RGB fans and all other accessories are packaged neatly.
Unboxing the accessories: we find three sets of case and 30mm radiator mounting screws (individually bagged), a 4th generation Tt fan controller, a power cable with a MOLEX connector, a USB internal header to dual Micro-A connector cable, and a separate bridge cable, which is used to daisy chain fan controllers. 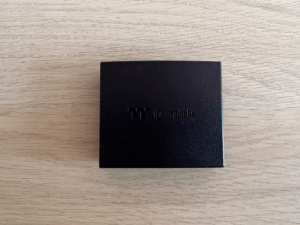 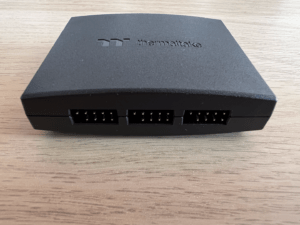 Looking closely at the 4th generation fan controller, we can see a stamped logo on the top of the unit and three of the five fan connectors on the top edge. 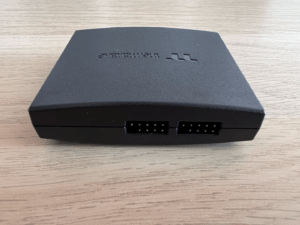 The opposite side has the latter two fan connectors. The left side houses the USB Micro-A connector and the 4-pin bridge cable connector. This connector is used to connect to an additional controller with the ability to bridge 16 controller boxes in total. 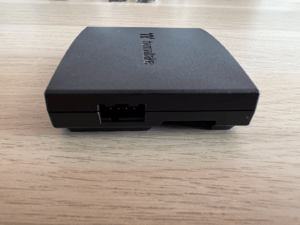 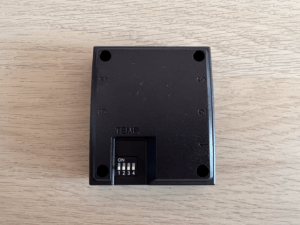 The right side has the power connector, which uses the “old-school” floppy connector and terminates at using a MOLEX connector, which is a disappointing connector choice as SATA power connectors have been the go-to for a while now.
The bottom of the box reveals the dip switches which are used to set the controller box number when more than one is being used. Refer to the manual which clearly guides you on what switch to set for the box number you wish to use. 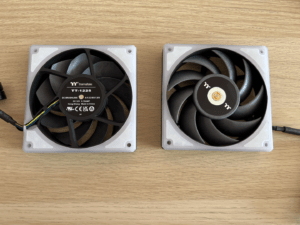 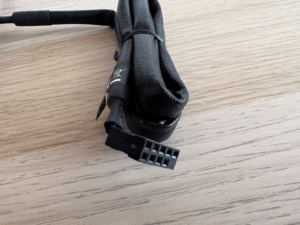 Taking a closer look at the TOUGHFAN 12 RGB, we can see the large diffused LED area around the edge of the fan (everything white in colour is lit up) with 2 addressable LED light rings in total. 1 on the front and 1 on the rear of each fan with a total of 24 LEDs per fan.
Something I am really impressed with is the attention to detail on the TOUGHFAN 12 RGB kit. The fans all have a braided material wrapped around the cables which I have to say helps with aesthetics for sure, but they also give the cables a bit more durability as well assisting cable management; they’re more rigid than bare cables and they should stand up well to a less-than-ideal environment, such as bare edges of cable management holes, sharp components and such.
The corners all have anti-vibration rubber mounts as standard, which help stop vibrations from being passed on to radiators or the case. Something now found on all of Thermaltake’s premium fans.
The fans terminate into a USB2.0 internal header connector (or a proprietary connector that looks very similar) instead of a typical 3 or 4-pin connector. This is to ensure they work exclusively and properly with the provided TT 4th gen fan controller.
The LEDs are really bright, and the white diffuser does a great job of diffusing the light overall around the front and back of the fan. 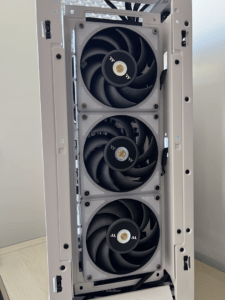 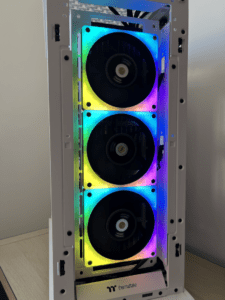 Installing the TOUGHFAN 12 RGB kit went without much issue. We made the decision to mount each fan to the TOUGHLIQUID ULTRA 360 AIO radiator on the front of the case, which went easily using the included radiator screws in the box. 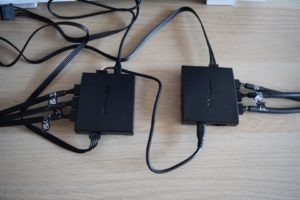 The cables are sized to fit into even the largest of cases, but fitting into our Thermaltake Divider 500 TG Air Snow mid-tower case the cable length went from the top to the bottom with length to spare, making it easy to connect to the fan controller boxes and hide everything away on the floor of the case with no issues. 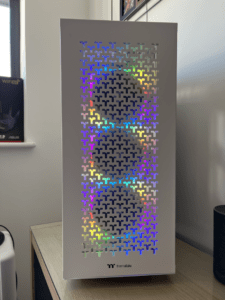 Turning on the computer and the light show is immediately started. The TOUGHFAN 12 RGB kit looks stunning installed in the case and will add immeasurable RGB goodness to any build.

The software package used to control the fans in the TOUGHFAN12 RGB kit isn’t new to us, and we like the fact they bundle it into the TT RGB Plus 2.0 software package, as it’s an all-in-one package that can also control other Thermaltake products like the TOUGHLIQUID Ultra 360 AIO we reviewed recently. 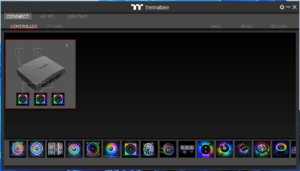 The software package allows the user to select what fans and where they are positioned on the controller on the first page. Thermaltake recommends a maximum of 3 fans be connected per controller, so make sure all controllers are used per pack. This is due to the 5v power cable limitation and is also the reason they are sold in packs of 3.

As you can see above, three fans are connected per controller. 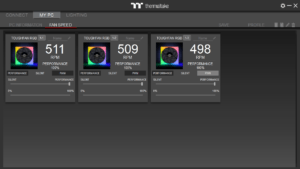 The MY PC window opens up the fan control profiles. From here, the Silent and Performance speed modes can be selected. Using these profiles we recorded (around) 498rpm and 2000rpm respectively.
A PWM mode is also available which runs alongside the speed profile and increases and decreases the fan speed depending on the CPU load to provide additional cooling at the cost of noise.
Speaking of noise, at full speed the fans are certainly audible but not annoyingly so, and at 41db under a 5GHz full load, all 3 fans were pushing a lot of air through the radiator. 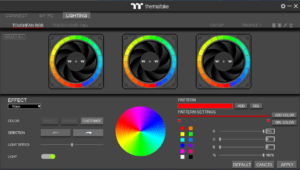 Finally, the lighting tab offers a whole bunch of lighting customisation. From individual LED colours per fan to a truckload of pre-made effects to select from. Of course, you can make your own customisations or just set a static colour should you wish for something more understated.

Having used the TOUGHFAN 12 RGB kit in our test bench for the last week we’re pleased to report they work fantastically well. Our test bench was kept surprisingly cool and fairly quiet at all times, under a varied workload.
The build quality is solid, with a strong matt black plastic on the TOUGHFAN 12 that contrasts the LED diffusers perfectly. The LEDs are some of the brightest we’ve ever seen and light up the entire diffuser. They really do look premium installed in the test bench.

These fans excel in the cooling department too. Even when ramped up under load and whilst certainly being audible at the full 2000rpm they were not at all loud. The PWM and Performance profile were used in the Tt RGB Plus software to control the fan speed depending on CPU load.

So, the Thermaltake TOUGHFAN 12 RGB kit performs well in the cooling department and has a decent software package designed around them that is simple and easy to use.
It’s fair to say that these are some of the nicest looking and brightest RGB LED fans money can buy.

Finally, the fans can now also be installed in a less traditional pull configuration inside the case attached to a radiator but still show off all the RGB goodness you’d typically only get on the front of the fan, neat!

With all these premium features comes a premium price. Though that being said, at £124.99 for the TOUGHFAN 12 RGB kit at Scan UK it’s around the same price we’ve seen from Thermaltake before with the Tt Riing Quad 12 Review. Making the price a not-so-hard pill to swallow.

Finally, onto awards. The Thermaltake TOUGHFAN 12 RGB kit walk away with our Gold award which is well deserved. 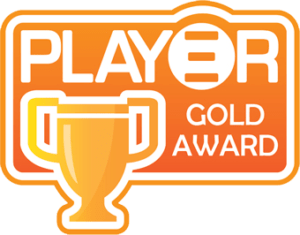 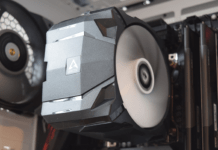 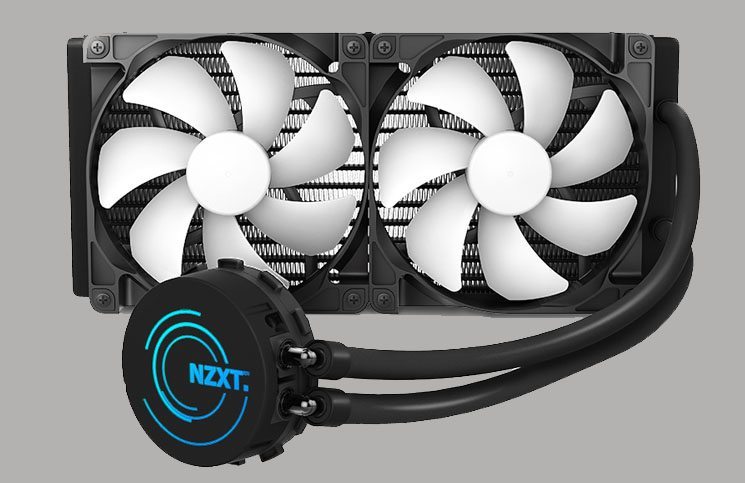