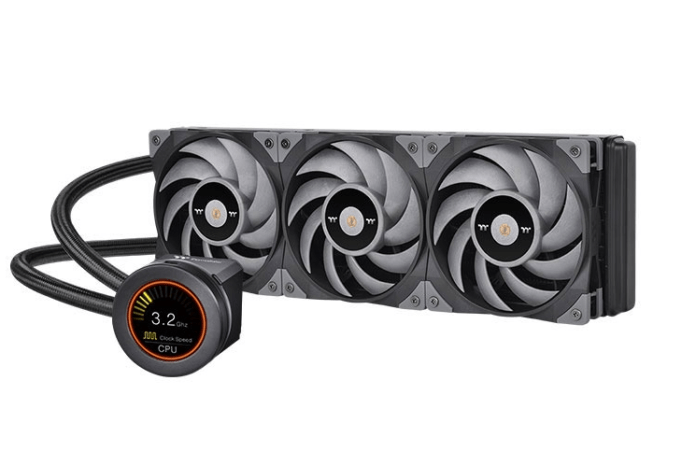 Today’s review brings another offering from Thermaltake, this time in the form of the Toughliquid Ultra 360 all-in-one (AIO). Let’s dig in and see if it’s as “ultra” as the branding suggests… 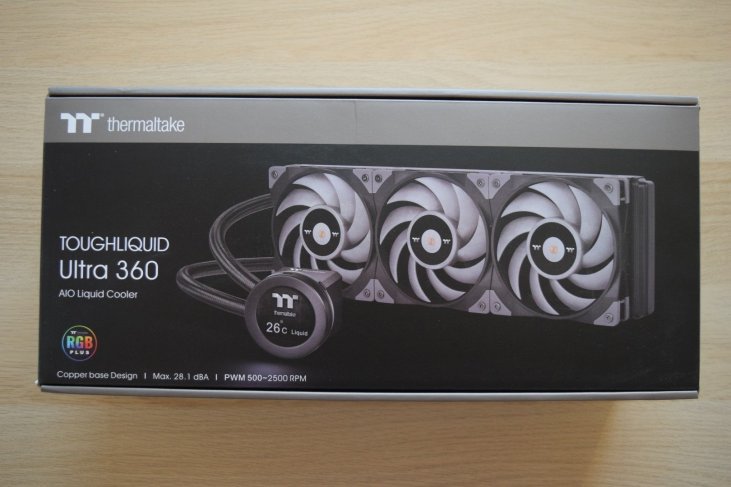 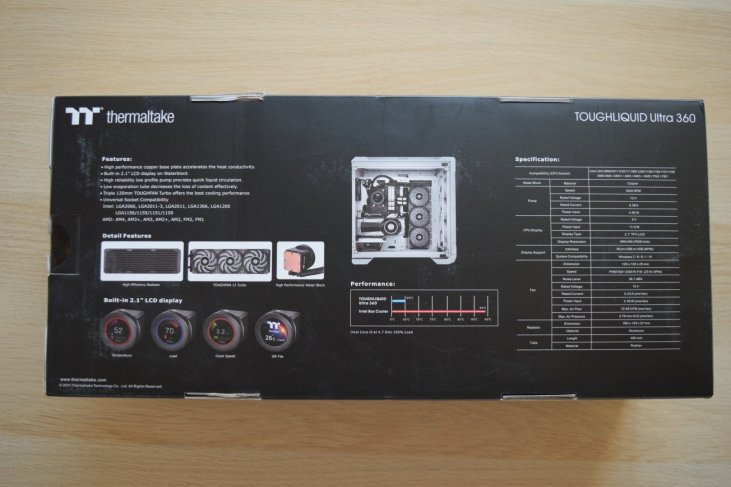 Thermaltake’s premium product line box-branding looks really good. It’s clear and concise with an image of the cooler taking up most of the front. The black and grey theme matches the overall aesthetic of the Toughliquid Ultra 360 itself. 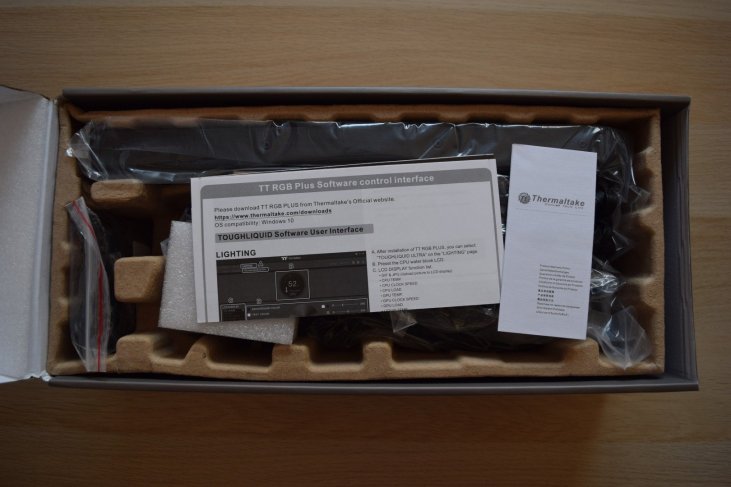 Opening the box reveals a typical sight. Happy to report that Thermaltake has chosen to use moulded cardboard for the internals, but as typically found the radiator, hoses and pump housing are covered in plastic wrapping.
We also find a warranty leaflet, the mounting instructions, and a guide for the TT RGB Software you’ll need to control the LED screen on the block. 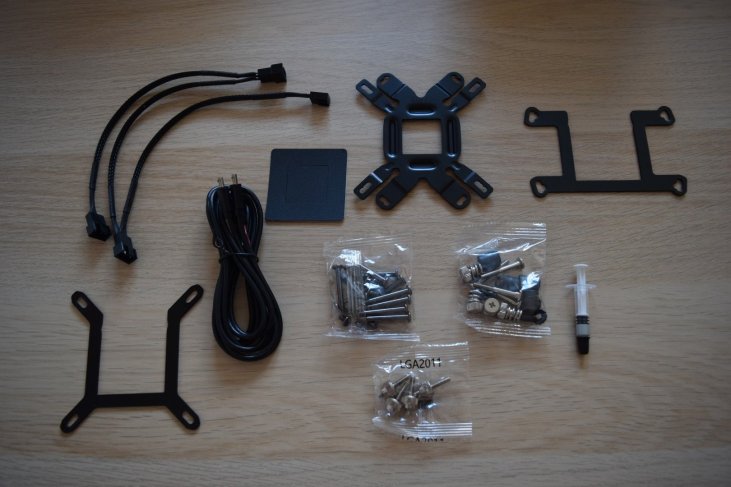 Mounting hardware is found in another small bag. This includes:

There are no LGA1700 mounting components in the box, however, Thermaltake like most other cooler manufacturers will send you one free of charge if you plan on upgrading to an  Intel 12th-gen Alder Lake CPU.

Disappointingly, most of the screws come in a sealed one-shot bag and once opened can never be used again: a poor choice compared to re-sealable re-usable bags. 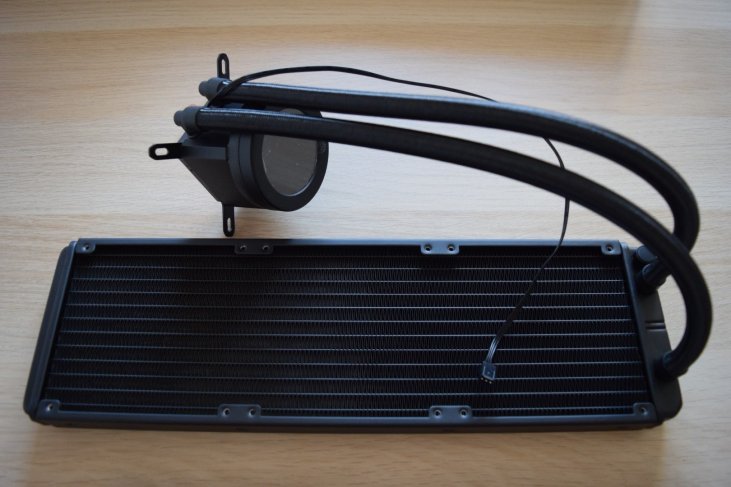 A quick look at the Ultra 360 straight out of the box. We can see the 3-pin cable which powers the pump, the screen on top of the housing, the braided hoses and the 360mm radiator. 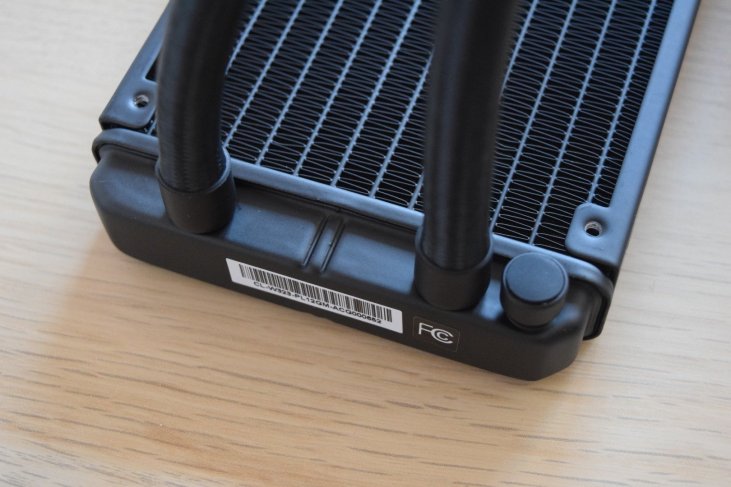 The radiator tank, with the hoses attached. Notice the additional fill port, this would have been used to fill the loop with liquid in the factory. 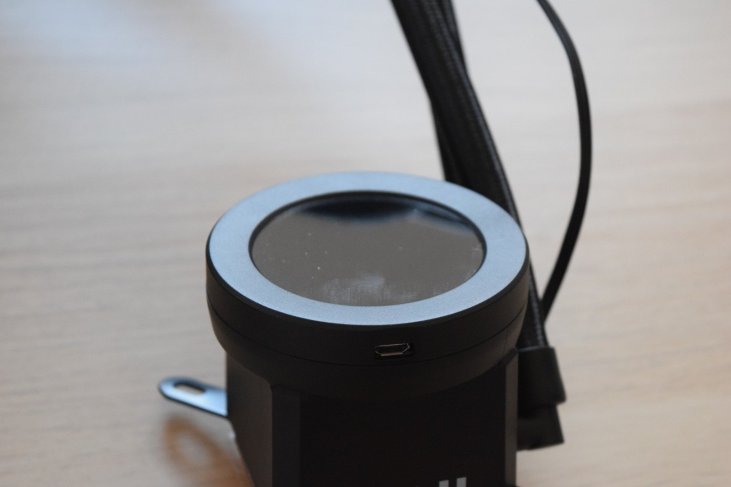 Here we see the rotatable 2.1″ diameter circular LCD with the micro-USB port on the side. This connects to an internal USB 2.0 header on the motherboard. 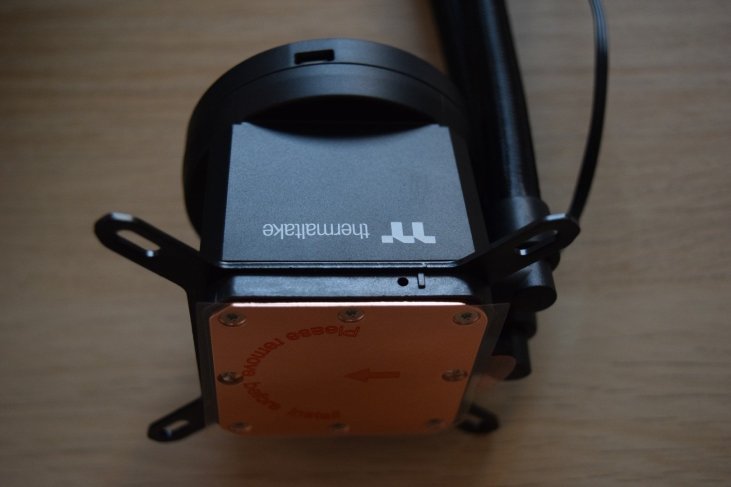 The pump and base are housed here below the LCD screen. The Thermaltake logo is inverted here which might seem a strange choice until you realise that once mounted on the motherboard it’s the right side up. 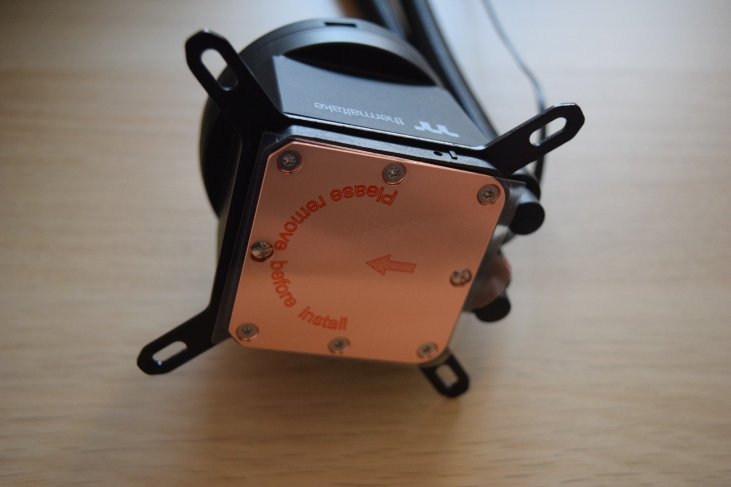 A nice shiny copper base plate here held in place with 8 screws. The baseplate is plenty big enough for all consumer CPUs and the pump operates at 3200rpm. 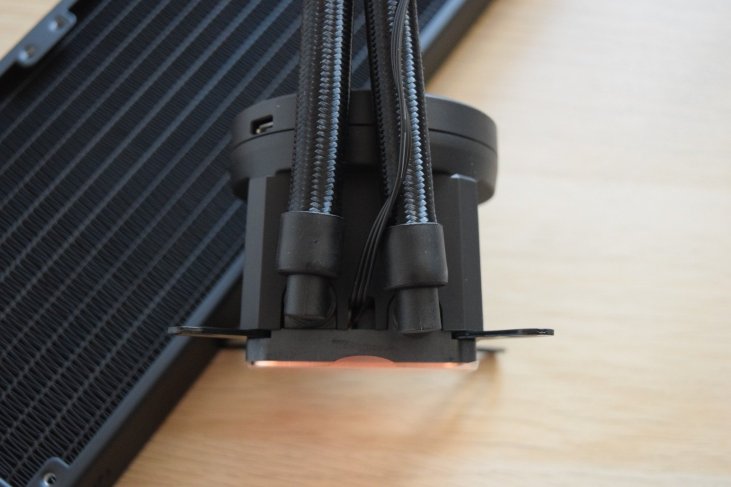 The hoses and 3-pin power cable protruding from the side of the housing in a typical AIO fashion. The removable Intel and AMD mounting plate can also be seen at the bottom. The plates easily slide in and out. 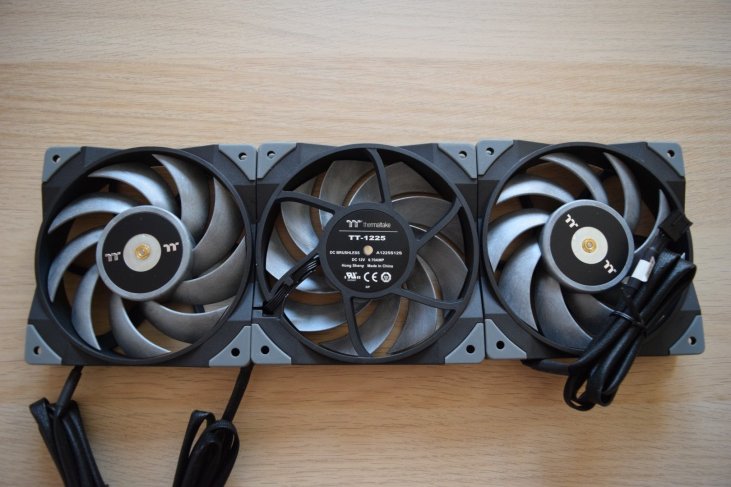 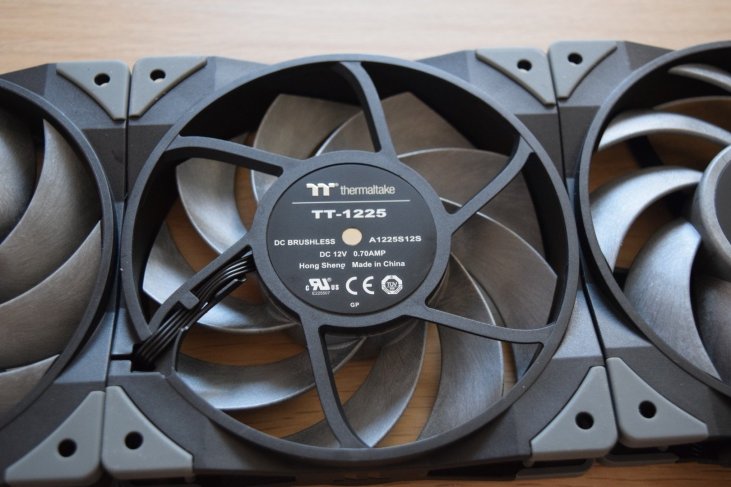 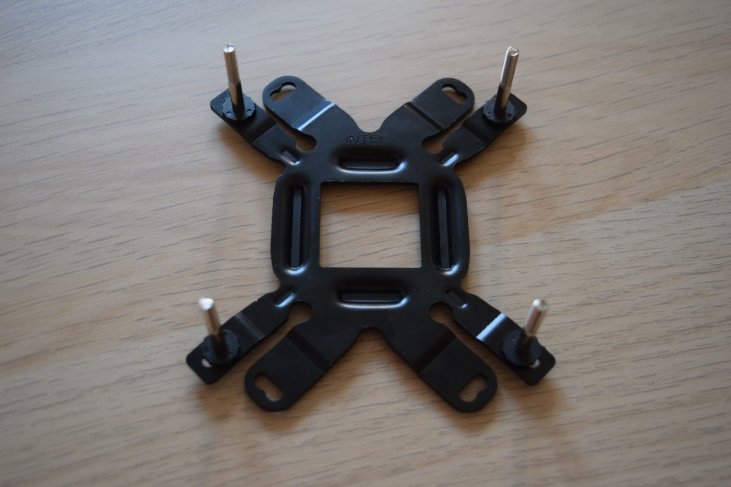 Installation on the LGA1200 socket motherboard to cool our Intel i7-10700k was pretty simple. Take the back plate, and ensure the side you need is labelled facing up towards you. In our case, “INTEL” can be seen at the top. Put the bars through the plate and secure them with plastic washers. 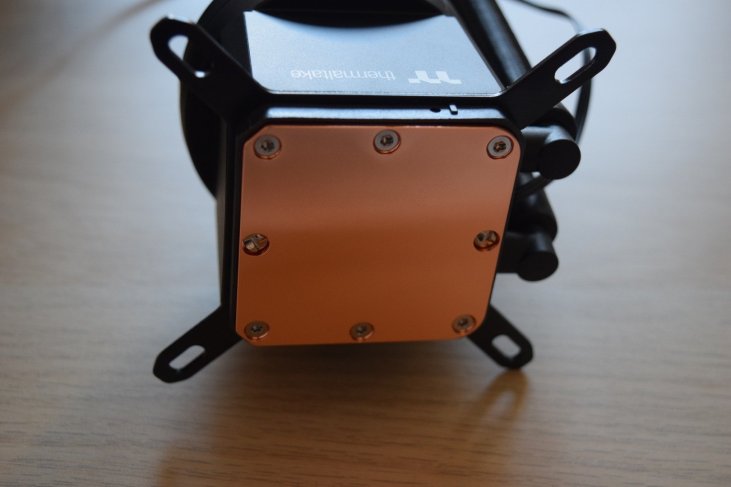 Remove the plastic cover on the base of the pump and put some thermal paste onto the CPU. Our paste of choice is Noctua’s NT-H2 for all our testing, though Thermaltake has included a small syringe of their thermal paste in the box for you. 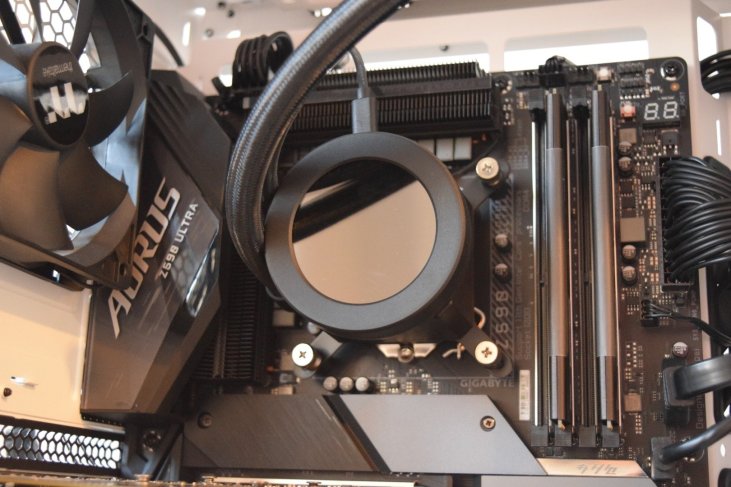 Mounting the block in place was easy, using the 4 spring-loaded screws for correct mounting pressure. 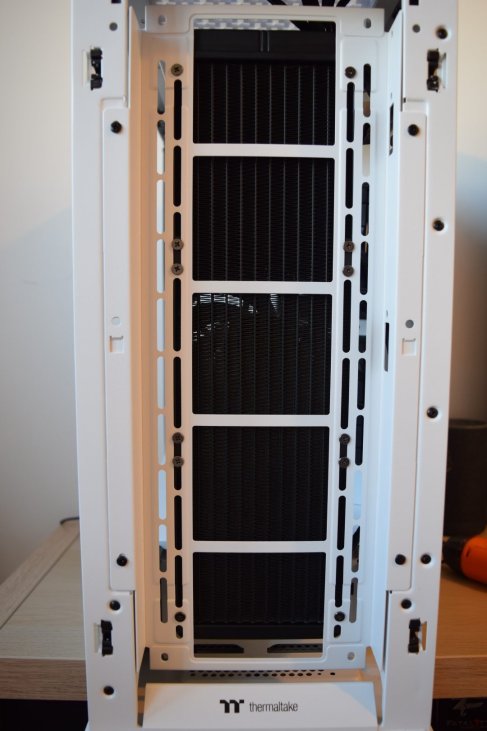 Unfortunately, the longer fan screw lengths were too short to put the fans on the front side of the radiator, so we settled for using the shorter ones and mounting the radiator directly to the front of the case.
Our test bench case is the Thermaltake Divider 500 TG Snow Edition mid-tower case. Installation of the 360mm radiator, in this case, can only be installed at the front, as the roof can only accommodate up to 240mm radiators. 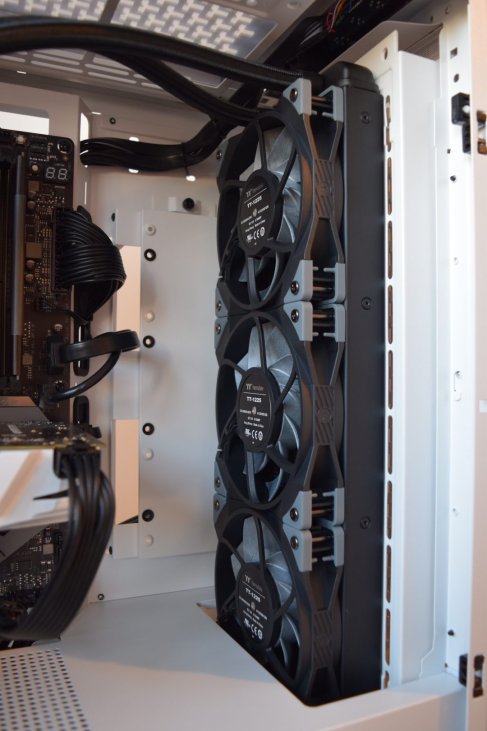 The longer fan screws were then used to mount the TT-1225 fans on the rear side in reverse to draw cool air from the front of the case through the radiator. A perk of mounting the radiator like this is that it will be easier to clean in the future. 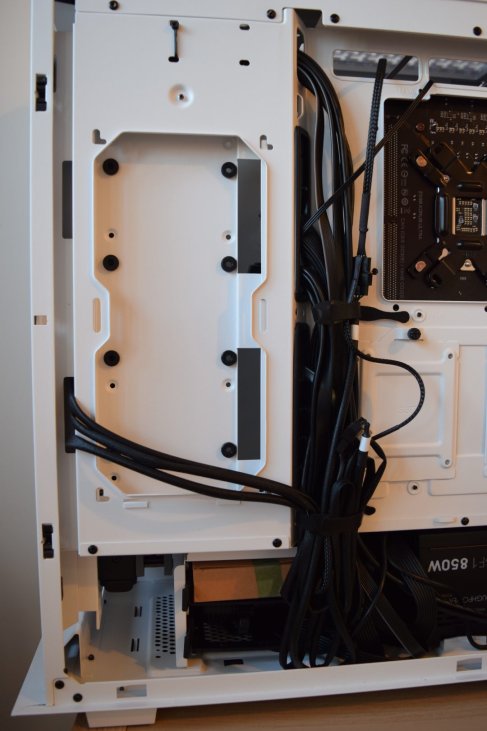 The case has cut-outs to easily route the fan cables through to the back of the case. We used the included daisy-chain fan cable to link all three fans to the CPU header on the motherboard. 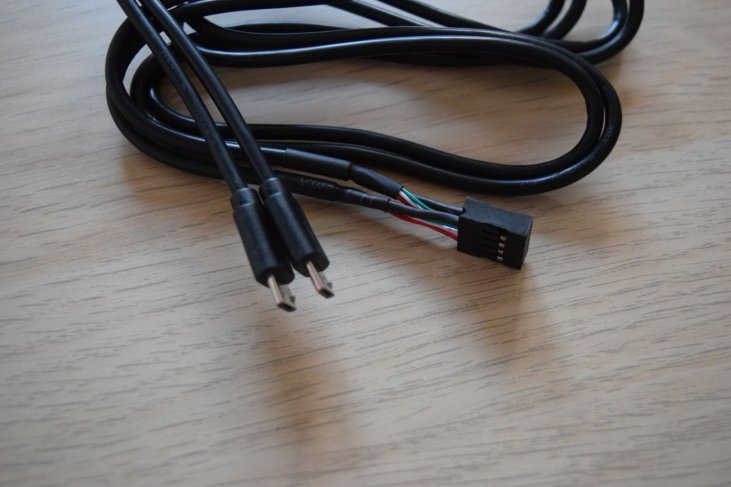 The internal USB 2.0 cable was then attached to the motherboard and routed through the rear of the case to the top to plug into the LCD micro-USB header. 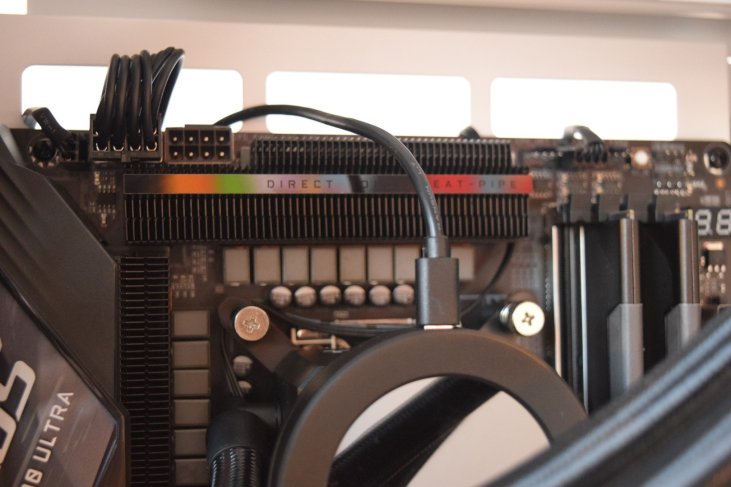 Unfortunately, a drawback of using the LCD screen is that the cable protrudes from the top of the housing.

When the screen is turned off, it has a nice mirror effect. 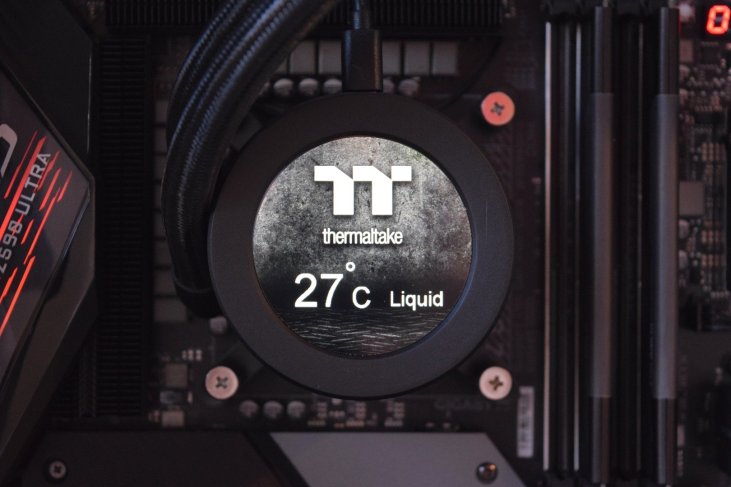 During power on and boot, this screen is displayed. This is the default screen that is displayed at all times before the TT RGB Plus software that controls the screen is installed. The LCD screen itself is a 480×480 pixel resolution and can be rotated depending on how the block is installed. 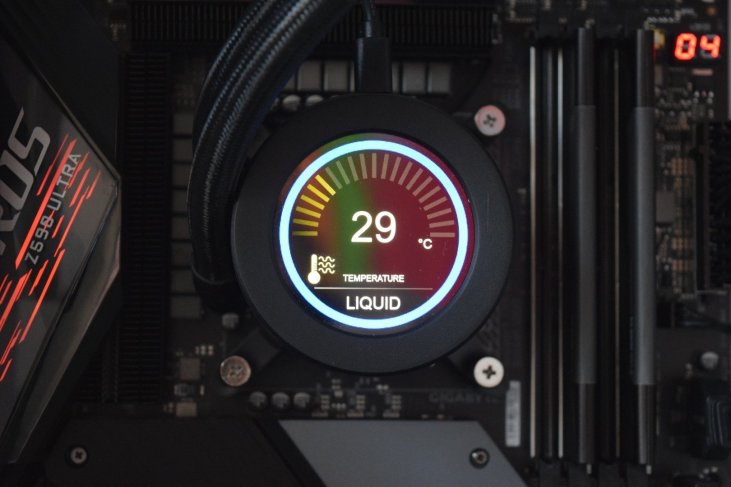 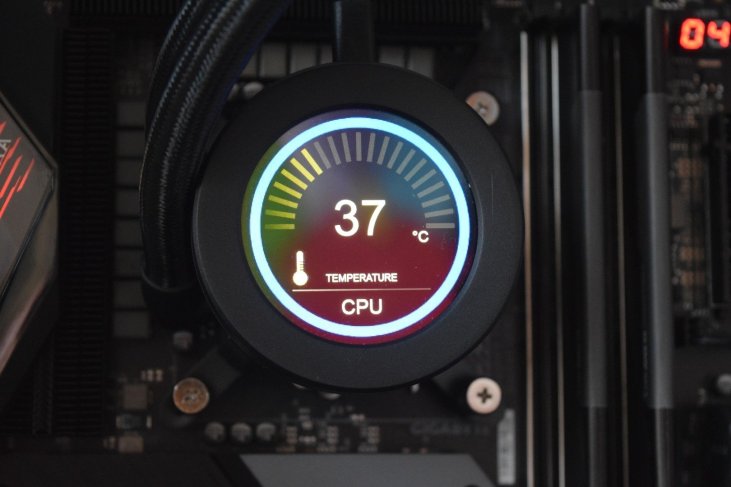 Once the software is installed, it gives you a few display options in regard to liquid and CPU temperatures, as well as CPU load. The text, background, and level colours can all be changed to whatever you wish which adds more customisation. 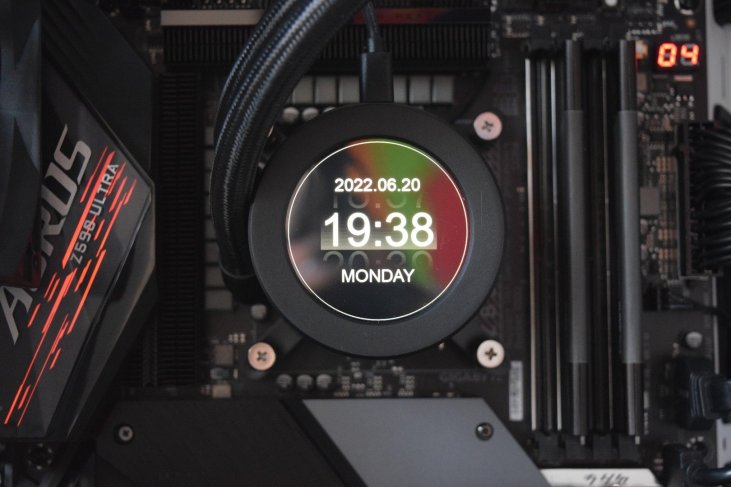 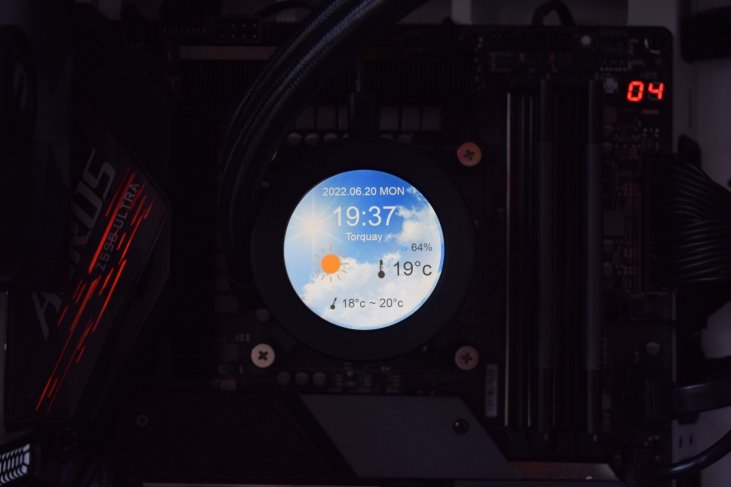 You can also have the screen display the date and time as well as the weather, though location services will need to be enabled for this to work properly. 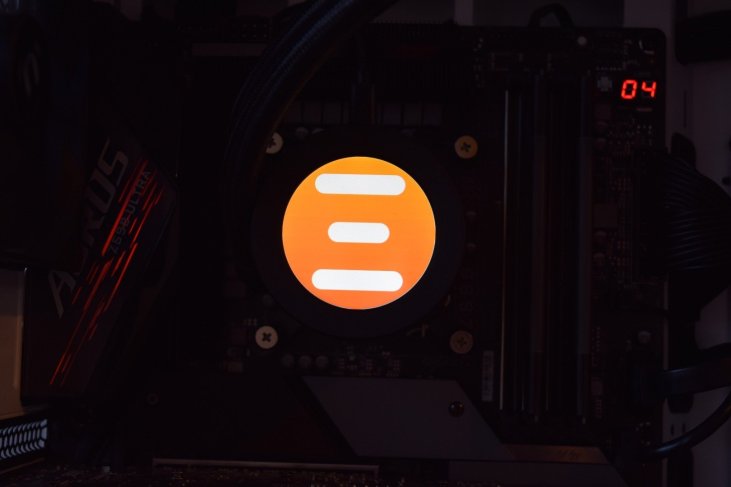 Custom 480×480 JPEG and GIF files can be added to the LCD screen as well, which adds yet another level of customisability to the TOUGHLIQUID Ultra 360’s stable. Here’s Play3r’s logo as an example.
It’s mighty impressive how clear the LCD screen is, and what you can do with it is excellent. Overall, it’s a neat addition that no doubt adds to the cost, which in turn makes it somewhat more justifiable when we get to it later on in the review.

We have decided to update the testing method accordingly for better and more consistent results. It isn’t ideal running Prime95 for a prolonged period, and if you get called away to do something it could be left running for much longer than needed. Our new methodology involves running a multi-threaded performance benchmark called Cinebench R23.

Thanks to Thermaltake for providing the GF1 PSU and Divider 300 TG Snow case for our new thermal test bench kit!

In addition to keeping our test setup consistent for all CPU cooling tests, we also always use the same thermal paste rather than any that comes supplied or pre-applied. Our thermal paste of choice is NT-H2 from Noctua. Thanks to Noctua for the hookup!

It has to be said, the cooling on offer with the TOUGHLIQUID Ultra 360 is fantastic, but for an AIO with a strong 3200rpm pump and a 360mm 27mm thick radiator, it’s to be expected.
Let’s not also forget that Thermaltake made a brilliant decision to include three of their TT-1225 Turbo Toughfan 12s as well, which by my own admittance are very good fans which look, and feel and, some would argue, weigh up to Noctua’s best and are some of the best-regarded fans on the market.

The presentation of the TOUGHLIQUID Ultra 360 itself is premium, and that quality is evident throughout. From the outer packaging through to the unit itself, it is all constructed to a high standard. Those looking for RGB on the Ultra 360 might be disappointed to find it doesn’t have any bar on the LCD screen, which doesn’t really count, considering its price.

The LCD screen is a 480×480 2.1″ display which is capable of displaying information such as liquid & CPU temperatures as well as CPU load. It’s also capable of displaying custom JPEG images and GIFs which add more customizability. The included USB2.0 data cable terminates to a pair of micro-USB connectors so one could go to the display housing whilst the second would be used to terminate to a TT RGB control box, which is used to control additional fans, etc from the Thermaltake range.

Fan noise was low at low speeds under PWM fan control but became certainly audible under high-load situations, like the load testing used by our Cinebench R23 testing. Though in fairness, it puts a 100% sustained load on the CPU for a long time.
That being said, the fans shift a lot of air and there’s no doubt that the cooling potential on offer here is excellent, which is shown in the graph results above.
The pump itself is inaudible, bar a few bubbles whilst setting in letting me know it was indeed working.

The TOUGHLIQUID Ultra 360 is one of the best 360mm AIOs we’ve seen on the channel to date. With premium build quality, colour 480p display, a quiet pump and some of the best static-pressure fans on the market it’s on to a winner. Coming in at around £230 at the time of the review, it’s a lot of money, but with the features listed above it’s certainly justifiable. It walks away with the Play3r Gold Award in today’s review. 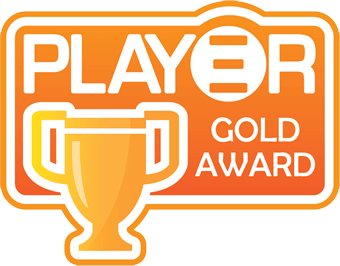 Thanks to Thermaltake for sending over the TOUGHLIQUID Ultra 360 AIO for today’s review.