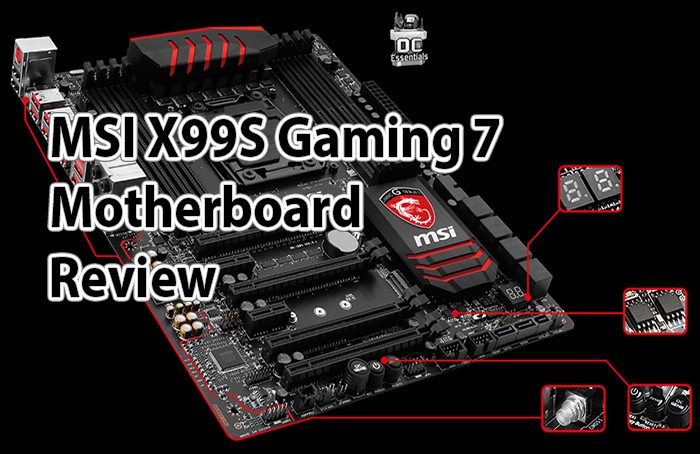 With Intel’s X99 enthusiast firmly implemented across the board and with many people anticipating Skylake; probably sometime this year, how has the X99 platform fared? Well personally I feel Intel have pushed the boundary even further although not as much as some people would have hoped; anyone expecting 50% jumps in performance from a generational upgrade, you ask for too much! Intel released an overclockable 8 core 16 threaded monster in the shape of the Core i7 5960x which eats rendering for breakfast. Complementing these are the 2 x 6 core CPUs which differ in PCI lanes available; the core i7 5820k having 20 lanes available and the beefier core i7 5930k having the same as the 8 core variant, 40. Of course the CPU is only one piece of the puzzle, the other major component is, of course, the motherboard…

Now today I will be getting to grips with a motherboard which comes from a recent range of boards which has not only impressed me since their launch, but has won many accredited awards with many publications, including with us at Play3r; I am of course talking about the MSI Gaming series. In particular on the test bench is the MSI X99S Gaming 7 motherboard which supports socket 2011-v3 CPU’s (Haswell-E) which are all overclockable with unlocked multipliers. The Gaming 7 has a plethora of features such as Audio Boost 2 sound technology and comes inclusive of a 6-month license of XSplit Gamecaster 2; fantastic stuff. DDR4 memory is of course supported and the X99S Gaming 7 supports up to 3333MHz (OC) which gives users plenty of room for overclocking.

So taking an overall look at the MSI X99S Gaming 7 motherboard, this particular model is full size ATX and features 8 x memory DIMM slots which support DDR4; speeds of up to 3333MHz OC are currently supported by this particular model. The Gaming 7 also benefits from 4 x PCI-e x16 lanes which depending on your CPU, will be able to run multiple graphics cards in either SLI or Crossfire; perfect for those wanting to max out games at the latest 4K HD resolution.

The general aesthetic of the board follows a red and matt black colour scheme which is usual for an MSI Gaming themed component; a really nice theme which seems to work good time after time in my opinion. The MSI X99S Gaming 7 utilises an 8 phase design allocated to the CPU with a further 4 (2+2) allocated specifically for the memory; quite a lot of power and good that MSI have used their usual Military grade components for high longevity and sustained reliability which MSI are well known for. Providing cooling to the MOSFETS is of course the red and black themed MSI Gaming heat sink which uses air circulating around it to dissipate heat effectively. Equipped in terms of audio, this particular model features a Realtek ALC1150 HD audio chip powered by the ever popular Audio Boost 2; this is complimented with the Sound Blaster software which allows for tweaking of things such as tone and the equaliser for a more refined and personal tone.

Next to the SATA Express port is the ever desired LED debug poster which is fantastic in the aiding of troubleshooting; many of times this is has saved my bacon on a multitude of different motherboards so I am really pleased MSI have regularly included it whereas some brands just don’t bother. The MSI X99S Gaming 7 incorporates 10 x SATA 6GB/s ports into the design with 1 x SATA Express port for the fastest consumer storage experience; please note when using SATA Express, this disables 2 ports effectively leaving you with 8 in total. These ports also support RAID configurations which include 0/1/5 and 10. Also featured is easy to access to the power, reset and OC Genie switch which is also available inside the MSI UEFI BIOS too so if you aren’t too happy on pressing random buttons on your motherboard; you don’t have to! Dual BIOS is also featured on this motherboard for redundancy so if you manage to “brick” your board while performing a BIOS update, you can simply start up on the 2nd BIOS, flick the switch and flash it back from the dead.

On the rear I/O of the MSI X99S Gaming 7 is a plethora of connections which include 8 x USB 3.0 ports (there is support for 4 via front panel connectors), 2 x USB 2.0 ports (4 available via front panel connectors), 1 x RJ45 LAN port which is powered by the popular Killer E2205 Gigabit LAN controller, 5 x 3.5mm Audio jacks powered by the Realtek ALC1150 HD audio CODEC, a clear CMOS button, 1 x PS/2 port for keyboards and mice and finally, an optical S/PDIF out port for higher quality audio setups. All in all, a lot of connections and a lot of potential to use this for a lot more than just a “gaming” board.

Gavin Bonshor - Jan 3, 2017 0
Has the best mid-range motherboard on the new Intel Z270 chipset been found? Find out now in our ROG Maximus IX Hero Z270 motherboard review!
%d bloggers like this: