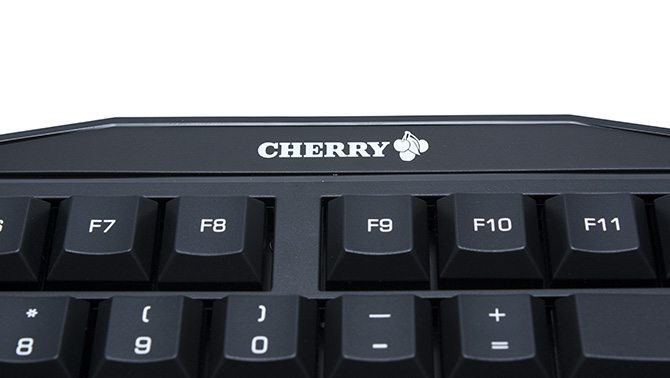 Cherry is a well known company, mainly for the brand of switches found in mechanical keyboards, but also for their fairly large range of peripherals in both the commercial and private sector. Anyone with a mechanical keyboard will have heard of them, as nearly every keyboard produced by the big brands (and some smaller ones) feature Cherry’s switches. Today I’ll be taking a look at their latest product to hit the market (or soon to hit the market), which oddly, is aimed at gamers as opposed to office workers.

The keyboard I’ll be reviewing today is the Cherry MX-Board 3.0 (or the G80-3850 to the more hardcore mechanical keyboard fans), which as stated in the previous paragraph, is aimed at gamers. It features a full compliment of  Cherry MX Red switches and custom low profile key caps. The MX-Board 3.0 is full size and is deemed more of a “budget” keyboard compared to other full size gaming mechanical keyboards on the market, but whether this is the case, is yet to be seen. For such a basic keyboard, it has a fair few features packed into it:

As you can read, it has a fairly standard set of features, although it is apparent that by having the option to disable the windows keys, it is to be accepted as a gaming keyboard, this however, will be determined during this review. Lets now take a first look at the keyboard.

The MX-Board comes in a very slim box, with a dark colour scheme, with the name of the keyboard in gold foil to add a premium look to it. The front of the box also has a large rendering of the keyboard, which if it wasn’t for the small graphic of the cherry MX switchs in the top right corner, appears to look just like a standard rubber dome keyboard.

The reverse has a top down graphic of the MX-Board, albeit in a US layout. To the right of it there are various translations of the features. Across the bottom half of the back, are diagrams of the different switches and their characteristics

The box is barely big enough for the keyboard, so it was a slight surprise they managed to fit everything you can see below in. Inside the box you have the keyboard, a USB cable, rubber caps for the feet, rubber pads for the base of the keyboard and a users guide. The MX-Board 3.0 is relatively plain compared to other mechanical gaming keyboards on the market. The keys have a low profile cap on them and are packed in fairly close together. The is a slight extrustion from the top middle of the keyboard which features the Cherry name and logo. The texture of the keys and the keyboard in general is the standard rough texture you have with most keyboards.

In the top right corner of all the keys is a button that turns off the windows keys when pressed in conjunction with the Ctrl key. As you will see later in the review, each windows key has a green LED, which indicates the status of it. The USB cable for this keyboard is detachable, which helps when storing the keyboard and of course, allows for better customisation if you wish to use your own cable.

The MX-Board 3.0 features a full compliment of MX Red switches, which are often associated with gamers. The keyboard is not backlit but features green LEDs behind the CapsLk, ScrollLk, NumLk and both Windows keys. The left shift key is quite large, but does not have any stabilisers, yet still remains quite firm in place with little movement. The larger keys such as the Return key, backspace,  right shift key and the space bar all use Cherry Corp stabilisers. The underside of the keyboard is relatively plain except for the large Cherry logo and a big red sticker featuring the usual model information etc. The two smooth triangular sections are where you would stick the rubber pads that will help keep the keyboard fixed to the desk.

The MX-Board has the usual feet that raise the back of the keyboard. They open outwards unlike a lot of keyboards, which would stop them from collapsing if the keyboard is pushed. As mentioned earlier, each Windows key has a green LED that indicates whether it is on or not. The Cherry MX-Board 3.0 features completely custom key caps that are much lower in profile than the standard key caps you find on most mechanical keyboards. The low profile keys also have a bevelled edge on them – something you don’t often see on key caps. The lettering is laser etched onto they keys, so have a slight raised feel to them. The photo below shows the MX-Board key cap (left) next to a Ducky Zero DK2018 key cap (right). So that pretty much concludes the more detailed look at the keyboard, now I will test out the performance.

Typically, the best way to review the performance of a keyboard is over a longer time frame, so all the features can be explored and all potential faults found. Many review sites go for quick reviews to get maximum content. I happen to do a fair bit of lurking on one of the best mechanical keyboard communities (www.reddit.com/r/mechanicalkeyboards), so I know that writing a review quickly often leaves a lot left for the imagination. I’ve now had this keyboard for a week now, and have been using it for around 10 hours a day – for both work and leisure, so it’s safe to say I’ve given it a thorough testing.

For testing the performance over this period of time, I put it through several standard day-to-day tasks such as gaming and typing. Upon getting my hands on the keyboard, it feels reasonably solid, with quite a weight to it – surprisingly so since it looks like a typical rubber dome keyboard, which tend to be fairly light. It was a piece of pie to setup, with no prior software or drivers needing to be installed, it is literally plug and play. Upon placing my fingers on the keys, it almost felt like a rubber dome keyboard, but it wasn’t until you starting to press the keys that the really magic of the Cherry MX Switches shone through.

First up was the gaming tests, so for this I decided that I’d use the keyboard in several different games genres: FPS, RTS and RPG. To kick things off I launched Battlefield 3, which still stands as one of my favourite FPS games. Typically, Cherry MX Red switches are ideal for gamers as they have a linear movement so you don’t have to fully press the key to activate the switch. The red switches also require a relatively small amount of force, making it quick and easy to press. For BF3 this was ideal, as it can require quick reactions so the easy key presses made it much easier to  respond to attackers. I decided to turn off the windows keys when playing as I often hit the windows key instead of the Ctrl or Z key, which was very useful as I happened to make that mistake more than once whilst testing.

The next genre is RTS, so I decided a dust off my copy of Supreme Commander 2 and jump into a massive battle lasting many hours. In a game such as this, it can really help knowing all the keyboard shortcuts (any Starcraft player knows this), so after a bit of practise, I learnt a few shortcuts and was well on the way to victory against my foe. Again the lightness of the Cherry MX Red switches was great when playing SupCom 2, although the lack of macro buttons was noticeable.

For RPG, it is a similar case to the RTS genre. For testing the keyboard in this genre I fired up the MMORPG; Star Wars: The Old Republic. Whilst the keyboard was great to use, the lack of additional macro buttons on this “gaming” keyboard was obvious and undoubtedly missed as SW:TOR makes good use of them.

Cherry MX Reds are not really know as the switch of choice when it comes to a lot of typing, however I find them great to use and definitely preferable over the black linear alternative. The MX-Board is reasonably comfortable to type on, but it would be better if there was a wrist rest. The additional volume keys were useful and much easier to use, as opposed to keys that require a function key to be held in conjunction with another to control the volume. I am currently using the MX-Board to type this review, which so far has been relatively enjoyable, however I have noticed I am making more mistakes than I do when using Cherry MX Brown switches.

I think it’s great to see Cherry coming up with new products aimed at a totally different market to what they are used to – especially considering there are lot of gaming mechanical keyboards on the market already, which make full use of their switches. The decision to use Cherry MX Red switches for their first gaming keyboard was a good choice alongside having a detachable USB cable that can be customised until the gamers content. It is interesting to see that Cherry have opted to use a their low profile key cap design, which whilst feel and looks great, could cause issues down the line. That said, it’s a great keyboard for gaming and typing.

The MX-Board 3.0 is Cherry’s first contender to the gaming market, which I think is fairly obvious due to the immaturity of the keyboard. As I noticed when gaming, the keyboard lacked the features that you would expect and use when gaming – such as the macro keys that were thoroughly missed when playing certain genres. The style of the keyboard is also relatively simple for a gaming keyboard, although again, this could just be Cherry testing the waters. The low profile key caps does also mean that there is very little choice in similar custom key caps, although rest assured, Cherry have said that there will be third party low profile key caps available soon and that you can use standard key caps as they follow the same spacing (just the key cap profile will be different). Cost-wise, you’re looking at an RRP of £79.99, which I think is fairly steep considering the design of the keyboard and features available – it’s not even backlit, and everyone knows that a good gaming keyboard has to be backlit!

Overall Cherry have made a great impact on the mechanical gaming keyboard market with the MX Board 3.0. The custom low profile key caps are a pleasure to use and the general feel of the keyboard is great, whether you are gaming or typing. Sure it lacks a few features that would truly make it qualify as a gaming keyboard – such as macro keys and and more gamer-orientated design, but it still performs just as well and if not better, than some of the current offerings. For now the MX-Board is limited to just red switches, although with the packaging hinting at others, we could well see other options available soon. The MX-Board 3.0 (G80-3850) is a decent first mechanical gaming keyboard for Cherry, however it could be improved, so whilst I’m not going to give this keyboard an award, it certainly deserves a merit. Keep your eyes peeled, rumour has it that there are other mechanical gaming keyboards from Cherry in the pipeline…