In this review we’re looking at the Genesis Thor 420 RGB, a slim mechanical keyboard with Content-branded switches. What sets this keyboard apart from others we’ve looked at is a laser focus on gaming. Many keyboards brand themselves as “gaming”, but Genesis have engineered the Thor 420 RGB specifically for blazing fast response. There’s also a host of gaming-specific features – read on for details.

On top of the specs, the Genesis Thor 420 RGB has several special features;

Unboxing the Genesis Thor 420 RGB, we find an appropriately sized box and a well protected keyboard. We do prefer recyclable packaging here at Play3r, so we do have to gripe a little. Not only are the foam blocks not recyclable, the plastic bag lacks a recycling mark. Nonetheless, the sizing is reasonable.

The keyboard comes with a small booklet with operating instructions in English, Polish, Czech, Slovak, German, Romanian, Russian and Bulgarian – you can tell Genesis are based in Poland. Otherwise, the only accessory is a cable management strap for the USB cable. 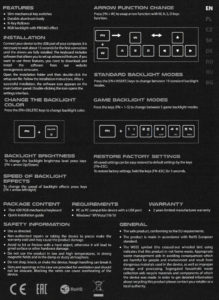 Genesis have topped the Thor 420 RGB in brushed aluminium, dyed to a gunmetal grey finish. A bevelled edge has a bright mirror finish. It’s a striking look, further accentuated by the visible torx head screws that hold it all together. Personally I love this – it’s nice to see metal being unapologetically bright and shiny, rather than trying to be understated. Underneath there are six round rubber feet, and a couple of basic plastic legs.

This is a very slim keyboard – a feature Genesis are enthusiastic to highlight. Even flipping the legs up doesn’t add much height. The slim profile makes the keyboard very comfortable for long gaming sessions.

The LEDs are very bright with distinct colours, and shine clearly through the keys. However, the transitions are bit… off. I can’t put my finger on it but it feels like rather than a constant colour change, the LEDs fade between fixed colours quite quickly. They’re clearly capable of producing intermediate colours, but don’t dwell on them for long.

There are five prebaked game modes. All are easily accessible, with FN plus a number 1-5. These light up certain keys in red, and turn off the rest of the backlighting to minimise distractions.

I personally spend more time typing than gaming, and am a very heavy typist. I’m going to be honest and say that for me, typing with this keyboard is not a fun experience. With wide flat keycaps it’s very very easy to brush against an adjacent key. The sensitive switches mean that this light brush is usually turned into a keystroke. On top of this, the only available layout is US – a little jarring and inconvenient as a Brit.

The thing is, this is not a typing keyboard. This is a gaming keyboard. So naturally I have to test it properly – by playing some games. You know, for work.

I’m pleased to report that for gaming, the experience is far better. The lightness and responsiveness of the Content slim blue switches is suddenly a huge plus. In particular I’d call out wingsuiting in Just Cause 3 – a game I have nearly 800 hours in – as something that I personally found to benefit massively. Not only do the ultra-fast switches let me make delicate adjustments with ease, but thanks to short travel even my lead fingers turn into a light touch. Vehicle driving would also benefit. Outright racing games are usually considered better with a controller, but vehicle use in other games is common and tends to happen with a keyboard.

Genesis describe the switches as “giving you an unfair advantage over your competition”, and I had initially intended to refute that. After all, a keyboard is not a replacement for skill. However after using it I can honestly say it really does genuinely help in some situations. Overall, the Genesis Thor 420 RGB has serious gaming credentials. If you’re a lighter, more precise typist than I then you might absolutely love it.

The software for the Genesis Thor 420 RGB has two tabs – “PCMODE” and “SETTINGS”. The “PCMODE” tab has most of the options greyed out. The only options are profile management, and backlight settings. Moving to the “SETTINGS” tab, an individual key can be selected to unlock the rest of the options.

We have fairly powerful set of macro options here in the “SETTINGS” tab. The recording interface is a little clunky, but does the job well. By default, the delay that your human actions had is recorded. Macros can then be edited, with actions inserted or deleted and delays edited either per action or blanket. In addition, we tested if macros work without the software running. Having closed the software and manually killed the low level service (THOR 420HID.exe), our test macro kept working. However, after unplugging the keyboard and plugging it back in again the setting is lost. This is a good balance of behaviour that avoids a user thinking they “broke” their keyboard because a macro or key reassignment stuck.

When we first got this keyboard a couple of weeks ago, the only backlight options were prebaked effects. Correlation is not causation, but we queried this with Genesis and as we were finishing this review a software and firmware update was posted that adds proper backlight customisation. The Customize setting has “Background” mode, which sets the entire backlight, or alternatively there’s “Single Key” mode which allows colours to be set up per key.

The colour picker is a little fiddly and would really benefit from a few presets, but it does the job. Colour reproduction seems off but manually finetuning the R, G and B values helps a lot. For example, clicking on orange on the colour picker yielded 253/127/6, which came out more like peach. Manually setting 255/127/0 gave us a good orange.

Overall, the software is a little clunky but does everything it needs to do now Genesis have added backlight customisation.

Going into this review, I was sceptical about this keyboard. I didn’t doubt the claims of responsiveness, but I did doubt that it would matter. I’m pleased to report that I was wrong.

In some games, having the light and responsive switches can make a huge difference. Tasks that were previously frustrating due to a lack of fine control became far more achievable. On the flip side, sensitive switches are unforgiving towards heavy and inaccurate typing. The slim profile also makes long gaming sessions comfortable, without needing a wrist rest. 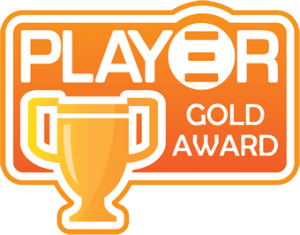 Thanks to Genesis for sending a sample of the Thor 420 RGB in for review.

Play3r - Mar 26, 2014 0
Today Dominic takes a look at the Hauppauge HD PVR Rocket, designed to be a portable video capture device, with the added benefit that it can record to USB Memory Sticks and external hard Drives. Lets see how well it performs in Dominic's testing.
Go to mobile version
%d bloggers like this: