Overclocking legend and world #2 overclocker Splave has been busy around the i9-10900K launch. He’s produced the highest ever 10-core scores in wPrime 1024M, GPUPI for CPU 1B, Cinebench R11.5 and Cinebench R20. These are truly impressive achievements, with a very competitive field. Unfortunately ASRock’s marketing department have decided to severely bend reality about the nature of the motherboard Splave used. ASRock show in the press release that the scores used an ASRock Z490 AQUA (Special Edition), however there’s no further information about what’s special about this board. To make matters worse the “more info” link directs readers to the standard AQUA website – ASRock’s limited-run Z490 halo board. In fact ASRock supplied Splave, and a few other overclockers, with a board with a 1 DIMM per channel memory layout compared to the AQUA’s 2 DIMM per channel daisy-chain layout.

This matters because these records are very close – GPUPI has just 121ms between first and second. This is easily close enough for memory tuning to be the difference between first and second. The special board – which some in the community are calling a “Z490 AQUA-OC” – has shorter memory traces. Plus, removing the extra slots reduces electrical reflections. This adds up to better memory overclocks than are possible on a Z490 AQUA.

Special Hardware has Existed Before

This is far from the first example of world records being made on special hardware. Gigabyte often produce non-retail LN2 boards for their in-house overclockers. The Z170X-SOC Force LN2, for example, is a special 2-DIMM board made by Gigabyte for socket 1151. But Gigabyte didn’t claim those records were made on the 4-dimm retail Z170X-SOC Force.

It’s also not unheard of for boards to be modified. ASRock themselves have done this in the past – overclockers were equipped with a Z170 OC Formula that had two of the DIMM slots removed. But that was the same PCB. You could make your own version with a retail Z170 OCF, flush cutters, and bravery.

It’s common for motherboards used when setting records to have special internal bioses. Often these increase voltage limits, or disable protections that might get in the way of an LN2 session. MSI, who often hold the DDR4 frequency record, do so with special XOC bioses on their 2-dimm mini ITX motherboards. However the hardware is still all retail. The BIOSes are also often made available if you know where to look.

Some Bring XOC to Market

We can’t close out without mentioning ASUS – the ASUS solution to extreme OC motherboards recently has been to just sell one. The Z490 Apex is a board you can actually buy (stock levels notwithstanding), and Korean overclocker safedisk has propelled it to global first places in Cinebench R15, SuperPi 1M and 32M, wPrime 32M, HWBOT x265 1080p and 4K, PiFast, Geekbench3 multi core and Geekbench4 single core. Plus, the Apex currently occupies spots one, two and three for DDR4 frequency. The physical clock of 3332.7MHz achieved is equivalent to an astonishing DDR4-6666. These used internal bioses, but the motherboard hardware itself is the same.

Where The Line Is

It’s great that ASRock made the “Z490 AQUA-OC”, even if it’ll never be sold. Where it goes from a cool rare ASRock board to a marketing lie is attributing the records (even suggestively) to the Z490 AQUA that’s being sold.

Internal BIOSes are also common, but they still rely on the hardware being capable. Plus, the prowess shown on an internal BIOS will often be reflected on public BIOSes. After all, why sit on the improvements?

ASRock, however, can’t release a firmware update for the Z490 AQUA that changes the PCB. The hardware differences also mean that engineering that went into records on the “Z490 AQUA-OC” isn’t necessarily applicable to the Z490 AQUA. This is where we feel ASRock have really crossed a line – this isn’t just proprietary tweaks or mods, it’s a completely different board with a bespoke PCB. ASRock’s press release calls the board a Z490 AQUA (Special Edition) no less than 7 times, however the accompanying image and link for extra information is for the standard 4-DIMM layout whilst there’s no information about what’s special about the board on that page. In fact, an earlier version of the press release didn’t even include the vague disclaimer that it was a Special Edition. For ASRock marketing to say “Learn more about this motherboard here“, when those two boards are not the same is a lie, plain and simple.

How Do We Know ASRock Marketing Told a Lie?

Firstly, let’s get something out of the way. We can all see that the board Splave used has had a couple of normal modifications, and that’s not the issue. Firstly the waterblock has been removed, making way for an LN2 pot. Secondly, the board has been painted in what looks like yellow Plasti Dip or a similar waterproof coating. These are normal and expected – extreme overclockers frequently waterproof their boards to protect against condensation at low temperatures.

The issue is the two memory slots, and their position. A large gap between the slots and memory VRM jumps out – too big to be achieved just by desoldering one slot per channel. Also visible are components in the way of where the extra memory slot would normally be. 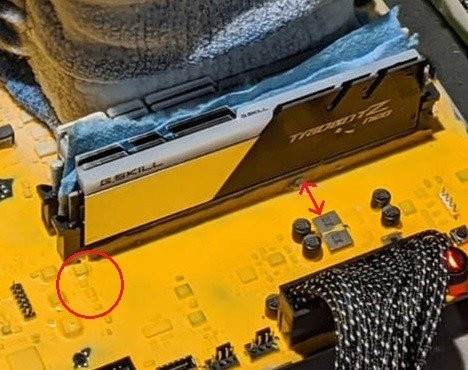 Youtube channel Actually Hardcore Overclocking, where the story broke, has a follow-up video going into more depth, and we don’t want to steal their thunder. It’s well worth watching the follow-up video.

To wrap up the article we want to say that none of this should take away from what Splave have achieved – or even what ASRock’s engineers have achieved. Splave is a great overclocker, and he did great work on the “Z490 AQUA-OC”. But it’s not a Z490 AQUA.

Craig Bartlett - Sep 27, 2015 0
A little gem I found on Kickstarter, the Skarp Laser Razor promises to bring shaving into the 21st century. But, would you back it or is it too new?
Go to mobile version
%d bloggers like this: