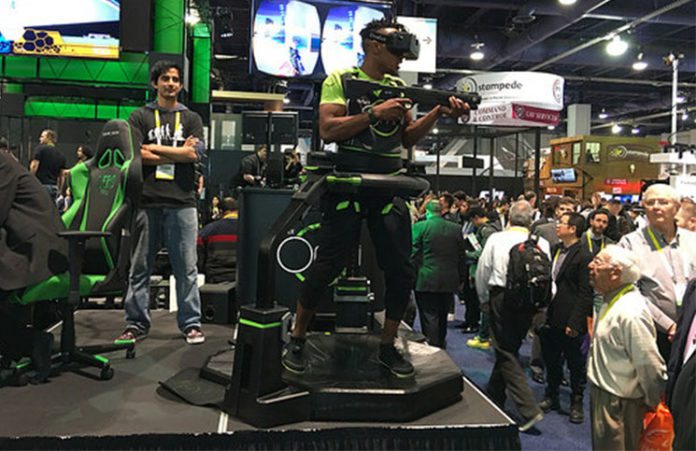 Virtuix’s Omni was not only one of the biggest VR-related Kickstarter campaigns when it launched in June 2013, it was also one of the ten biggest technology crowdfunding campaigns at that time, raising over $1.1 million against a goal of $150,000. Officially described as a “locomotion simulator” for virtual reality games but commonly referred to as a “VR treadmill”, the platform allows users to walk, run, jump and crouch in their favourite games. The Omni features a bowl-shaped treadmillesque surface, with users being required to use special, friction-reducing shoes in order to operate it. It is theoretically possible to use the system in conjunction with any PC title that supports one of the existing virtual reality headsets such as the Oculus Rift, HTC Vive and OSVR, as all of its user input is effectively translated into joystick commands.

The final version of the Omni was presented at the Las Vegas-based CES in January 2015, and the retail version began shipping in November 2016. However, by December last year, the company announced that it would no longer be shipping the $699 product outside of the US, due to the fact that (despite raising an additional $6.6 million in July 2016) it did not have the “resources to deliver and service units in every country”. Still, the system has received much more publicity in 2017, announcing last week that it had become an official hardware partner of HTC, with native Omni support being added to titles including Arizona Sunshine, Quell 4D and The Bellows.

“Locomotion simulators” such as the Omni and a similar British-based start-up, the WizDish ROVR, have the obvious benefit of providing users with a more authentic, and thus more immersive, experience of being able to simulate real-life movement in their games, solving the issue with developers having to design their environments to be room-scale, as is the case with room-tracking solutions to the issue such as the Vive’s Lighthouse. Even more importantly though, these “VR Treadmills” also go a long way to solving the “locomotion problem” that has dogged virtual reality technology since its inception. This problem essentially is as follows: moving in virtual reality while your body remains stationary can cause some users to experience a nauseous feeling akin to motion sickness. The problem has undoubtedly prevented VR developers from having the freedom to create the truly immersive experiences players are demanding, and it is for this reason that the Omni and its contenders – hardware that minimises the issue by reducing the stimuli mismatch that occurs – could be one of the most important milestones in the history of virtual reality innovation.

Putting the Achievement in Context

Virtual reality has a storied history; one that stretches a whole lot further than 2011, when an 18-year-old Palmer Luckey hacked together the first prototype for the Oculus Rift in his parents’ garage in Long Beach, California. All the way back in 1960, the “father of virtual reality”, Morton L. Heilig, created and patented the Telesphere Mask. It was the first-ever head-mounted virtual reality display and the forerunner to the likes of the Samsung Gear VR, HTC Vive and Oculus Rift. While extremely rudimentary by today’s standards, the device provided stereoscopic 3D video, a widescreen field of vision and stereo sound, which was an extremely impressive feat for the time. Fast-forward some 35 years to 1995, and two innovations came to the fore which proved similarly important in shaping VR into the technological force we know it as today. On September 5, 1995, a baseball game between the Seattle Mariners and New York Yankees was broadcasted live over the internet by RealNetworks and ESPN SportsZone, paving the way for the future of live video and audio streaming online. Much like VR, live streaming provides users with an immediate and immersive experience of whatever they are watching, anywhere in the world.

The rise and ease-of-use of live streaming have drastically democratised journalism, with the mainstream media giving way, at least to a certain extent, to an army of citizen journalists around the world who have been empowered by smartphones, social media and online streaming tools. In recent years, this has gone even further: in 2016, live streaming on Facebook Live and Periscope became the favourite tool of marketers and users alike, allowing for near-instant broadcasting of product launches, fashion and music shows and even private events to those who couldn’t be there. The iGaming industry is another such market to have benefited from the rise of live streaming, with online casino operators including Bet Way offering live roulette, blackjack and other table games, many of which feature multi-camera technology to integrate human dealers, who chat and interact with players, into the online casino experience – going some way to emulating the experience and interactivity of stepping foot into a real-life casino. Similarly to the sports industry, live casino games also make use of on RFID chips and OCR technology to enable the cameras to pick up information from the broadcasted scene to relay to the viewer in an overlay.

When combined with VR, live streaming has shown it has the potential to offer users the most immersive and immediate experience of all: for example, April 14, 2016 saw the world’s first surgical procedure broadcast live in virtual reality. The operation, carried out by Dr. Shafi Ahmed of the Royal London Hospital, allowing users a 360-degree view of the theatre as the doctor removed a cancerous growth from his patient’s bowel.

Learning from Past Mistakes

The second VR breakthrough of 1995 came with the August 16 release of Nintendo’s Virtual Boy virtual reality games console – although for all the wrong reasons. The tabletop system was supposed to bridge the gap between the Japanese gaming company’s Super Nintendo and the yet-to-be-released Nintendo 64, but it was remembered more for its poor games library, migraine and eye-strain-inducing gameplay and monochromatic red and black visuals than its technological advances. The $180 console sold only 770,000 units, and was discontinued only seven months after launch. All in all, the Virtual Boy was an important milestone in the history of VR purely because it showed hardware and software developers how not to design their products.

Time will tell whether or not the release of “locomotion simulators” such as the Virtuix Omni will be considered such an important milestone in the history of virtual reality. On the face of it, it appears to offer a working solution to one of the biggest problems facing VR developers to this day. But the system’s success will ultimately depend on Virtuix’s ability to firstly, generate enough early sales to drive mainstream success and in turn, lower the platform’s hefty $699 retail price tag, and secondly, ensure that gaming developers are fully onboard with its technology. The company’s partnership with HTC should go a long way to ensuring that the product becomes a must-have for virtual reality adopters.

Paul Davies - Oct 28, 2019 0
If you haven’t been living under a rock for the past few years, you are aware that online games moved from a fun after-homework...
Go to mobile version
%d bloggers like this: