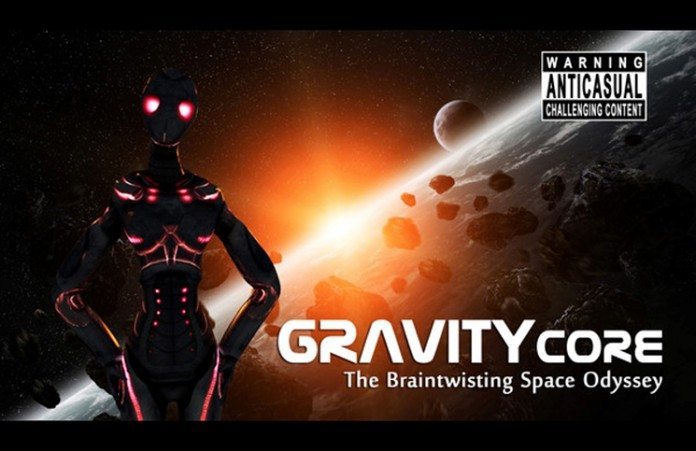 Gravity Core describes itself as an “anti-casual, braintwisting space shooter” and is Gravity Games UG’s first game. Gravity Games UG is an independent German software studio with only one constant studio member. The idea is to provide a home for talented people who can join the group on a drop-in-drop-out basis and contribute as much to each project as their time and skills allow, which is an interesting concept and had me very eager to see the product of this system. You start the game on the spaceship M.O.T.H.E.R with your guide, the very sarcastic, superior artificial intelligence, E.V.E. You quickly learn that a recent alien war has resulted in a massive amount of space debris that you have to destroy before it collides with a human colony. Looking at the description of the game on its website made me think I was in for another take on Asteroids, however I was pleasantly surprised.

Gravity Core’s gameplay is very interesting and addictive. You play as two ships connected to a gravity core between the two, you spin around this core to avoid and destroy space debris using this core and by shooting them. The steady increase in difficulty and the nature of the game is what makes it quite addictive and every time I failed I felt more and more determined to complete the level. That being said it wasn’t especially difficult, the levels felt challenging but not impossible, yet that made it even more frustrating and what made me more determined every time I failed. Gravity Core does a great job of playing to your completionist side.

The keyboard controls of Gravity Core worked well; they were accurate and the choices of buttons felt logical. The game also has the option to change these controls, which is an option I always like in a game. Gravity Core also boasts to fully support gamepad and joystick controls, which on discovery had me very excited to dig out my joystick. The gamepad controls, which were also customisable, were once again logical and I found them easier to use than the keyboard.

However I did have issues with the joystick controls, in that the controls did not quite make sense, especially the look controls, and I wasn’t able to change them,  I did eventually get used to them and after that I found them to be accurate in how they responded. I was a little disappointed about the joystick controls but it wasn’t a big issue due to the gamepad and keyboard controls being good. If I had one suggestion, though, it would be to give the player the option to tweak the joystick controls, remapping them to what work’s best for them. Gravity Core’s atmosphere is very immersive, I found myself easily getting too invested in a level and yelling at my screen in dismay at failing a section. Everything really came together in this game to make it a good experience. It even has an extra option of a cockpit view to ramp up the difficulty and the immersion. Playing the game in this way really immerses you and makes it much more difficult to shoot asteroids.

Unfortunately there was one thing that broke my immersion, and that was E.V.E. Her movements and voice acting didn’t live up to the standards that the rest of the game set, and it was sadly quite a disappointment. If there was one thing I’d love to see the developers go back and work on, it would be E.V.E. More fluid animation and better quality voice acting would make this game one hell of an immersion trip. The music in Gravity Core was generally very immersive. Some pieces being a little sketchy, but the majority of the music fit in well, giving the slight eery feeling of being in outer space, yet still being epic enough to remind you you’re saving the world. As mentioned before, the voice acting was a little underwhelming, especially E.V.E. She sounded stuttery, which ruined a couple of her jokes. The jokes also weren’t quite up to par. It would be great if Gravity Games UG went back and improved them a bit. As it stands now, they’re just not that funny. With that said, the sound effects were perfect, with the hum of engines sounding crisp and responding to your controls accurately. Gravity Core’s graphics were impressive, upon opening the game there’s the option to choose the graphics quality and resolution. There are 6 levels of graphics quality to choose from and the resolution ranged from 1152×720 to 1680×1050, I ran the highest of both these settings, using a GTX 760 and 16GB RAM, and it ran very smoothly and looked incredible, especially the backgrounds, which in some level sets were very beautiful. The only issue I had in terms of graphics were the animations of E.V.E. walking; at times she seemed more like she was floating rather than walking and walking down stairs was very stuttery for both E.V.E. and the playable character.

At £6.99 on Steam I would say that Gravity Core is worth getting. There’s a campaign and 6 other level packs, all of which are very fun, especially if you like addictive rage-inducing games. The game sets a high standard, and unfortunately I feel that E.V.E. doesn’t reach that standard, so improvements need to be made there. However other aspects of the game make up for what she lacks, making it overall a very good game, especially as it’s Gravity Games UG’s first game. Gravity Core came with a warning saying that it is “challenging, anti-casual and just as frustrating as failure due to one’s own lack of abilities can be.” and I completely agree.

– A very immersive, addictive and all around fun game to play.

– E.V.E. has stiff animation, and her dialogue needs reworking.

Govan - Aug 15, 2015 0
Combining tough game modes with fast-pacing, Insurgency will offer the challenge of realism that only the Arma series can beat.
Go to mobile version
%d bloggers like this: