GIGABYTE have detailed their LGA1200 motherboards for Intel Comet Lake desktop chips. Highlighting the Z490 options, GIGABYTE have drawn attention to an improved “Fins-Array II” heatsink and Daisy Chain memory routing. In addition, the boards are ready for PCIe 4.0 and have many smaller improvements.

GIGABYTE are topping off their range in their usual style, with the Z490 Aorus Xtreme range. Not only is there an air cooled board, but also a Z490 Aorus Xtreme Waterforce for the extremely heavy of wallet. The true flagships with a high but realistic price are the Z490 Aorus Master, Ultra and Vision D. Moving down the range, GIGABYTE have a wide selection under the AORUS, VISION and GAMING banners. Finally, in the value segment, the UD branding comes back once again.

The PCIe 4.0 readiness extends to GIGABYTE’s entire range of Z490 boards at time of writing, even the impressively cheap Z490M. The extent of the PCIe 4.0 design ranges from just the BCLK generator and primary PCIe x16 slot on the cheapest boards, up to switches and redrivers for multiple PCIe 4.0 slots on top models. Intel’s 10th gen Comet Lake chips lack PCIe 4.0 support, but it’s expected to touch down with next-gen Rocket Lake chips on the same socket.

There are a lot of features for GIGABYTE’S Z490 range, including 90A smart power stages for the VRMs and thunderbolt ports on some models. However there are three in particular we want to highlight.

High-end GIGABYTE Z490 boards come with VRMs using 90A smart power stages with up to 16 true phases. That means independent, directly driven, by a 16-phase controller. Despite this, GIGABYTE are aware that some users will be absolutely thrashing their VRMs with a water-cooled Comet Lake 10-core. Where ASRock chose to add fans to their flagship Z490 boards, GIGABYTE is beefing up their heatsinks.

The improvements come fourfold. First, GIGABYTE’s new Fins-Array II claims “3x the surface area compared to traditional heatsinks”. This is achieved with a tight array of small fins, far from what the community derides as “fashion blocks”. Second, improved “Direct-Touch Heatpipe II technology” puts an 8mm Heatpipe right up against the heat-generating components. Third, reshaped fins are claimed to allow for superior heat dissipation. Finally, a high-end LAIRD 7.5W/mK thermal pad (5W/mK on cheaper models) gets the heat from the VRM to the heatsink faster.

Like ASRock’s VRM fans, GIGABYTE is primarily gracing their top-end boards with the improved cooling. If you’re water-cooling a top-end comet lake chip like the i9-10900K, GIGABYTE thinks you’ll do it with the Z490 AORUS PRO AX or better.

While many have scoffed at what they see as another Skylake rehash, the overclocking community has been buzzing about Z490. Words like “DDR4-5500” get thrown around in excited whispers. We know Comet Lake i7s and i9s have an improved memory controller because they add formal DDR4-2933 support. The rumour is that it translates to impressive overclocked speeds at the top end, and could potentially take AMD’s world record.

When a motherboard manufacturer designs their memory area they have a choice to make about layout. On a typical mainstream board (2 channels, 4 slots) there are two main options – T-topology or daisy-chain. T-topology runs traces to halfway between the slots and then splits off, making a T shape. This makes both slots equal, so configurations that fill all 4 run better.

Daisy-chain, on the other hand, runs traces directly to the first slot in a channel then from that to the second. This makes the traces as short as possible and minimises electrical issues like reflections for the second (outer) slot. The practical effect is that a 2-DIMM setup using the outer slots (“2 and 4”) will run better, at the cost of 4-DIMM setups.

A less common setup is 1 DIMM per channel (2 channels, 2 slots). Servicing just one slot gives the shortest traces, least electrical issues, and best performance. The downside is half the capacity. Hardcore overclocking boards like the limited-run GA-Z97X-SOC Force LN2 favour this layout for the very best memory overclocks.

Usually, GIGABYTE gravitates towards T-topology. All their Z370 and Z390 boards used it, as did X370/B350 and X470/B450 offerings for AMD CPUs. This time around though, things are different. GIGABYTE is highlighting a daisy-chain layout for their Z490 comet lake boards. A strong memory controller means that a 4-DIMM setup should still run reasonably well on daisy-chain, but 2 DIMMs will run even better. GIGABYTE highlight the ability to run up to 32GB per DIMM, and likely expect even high capacity setups to be served by 2x32GB rather than 4x16GB. 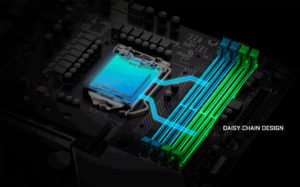 For the performance enthusiast, daisy-chain means extreme 2x8GB kits. The Z490 AORUS XTREME memory QVL claims support for 2x8GB setups up to DDR4-5000, listing kits made by HyperX and in-house at AORUS. GIGABYTE is also trumpeting ground layers shielding the traces, and even SMT DIMM slots on the Z490 AORUS XTREME – an expensive option that gives a small extra bump to signal integrity.

Bear with us, because this gets a little nerdy even by Play3r standards. What GIGABYTE are doing here is very cool though. There’s also a story behind it, going back to the AMD X570 launch.

Back when the AMD X570 chipset came out, it was joined by a new VRM controller chip. The snappily titled XDPE132G5C, made by Infineon, is a true 16-phase. More phases mean less ripple and faster response, and GIGABYTE implemented this in a 14+2 configuration on their top-end X570 board. However, when VRM enthusiast Buildzoid of Youtube channel Actually Hardcore Overclocking tested it, the performance wasn’t as good as it could have been. The star of his testing was actually Gigabyte’s X570 ITX board, which had a much lower phase count.

Obviously the 14+2-phase X570 Xtreme could still deliver far more total power, but why would the 6+2-phase X570 I AORUS PRO WIFI have tighter regulation? The reason seems to be the capacitors. GIGABYTE is using mostly can-style capacitors on the Xtreme, which can be a bit slow. The ITX board used “Surface Mount Device” (SMD) capacitors, which are smaller and solder directly to the board. This puts the capacitance right up against where it’s needed. As a result, spikes are soaked up faster and dips filled in faster. Technically speaking, SMD capacitors have a lower Equivalent Series Inductance (ESL – yes, inductance is “L”).

GIGABYTE’s engineers are smart people and don’t need a YouTuber to tell them SMD caps are better. Marketing, however, can be a different story. The cost has to be justified, and it seems an endorsement from an “influencer” helps make the case. Now the engineers have been let loose. Buildzoid is excited, and so are we.

So, what’s come out of all of this? GIGABYTE is equipping many of their Z490 boards with what they call a “Tantalum Polymer Capacitors Array”. Tantalum polymer is a particular type of SMD capacitor that uses the rare metal tantalum. Consequently, they maintain their performance better for longer, compared to aluminium alternatives – as long as they stay in spec. In addition, being in the SMD form helps give them the low ESL that really boosts performance. Overall, GIGABYTE is using top tier capacitors that on paper should massively decrease the electrical noise your comet lake chip has to deal with. And, well, just look at them;

This is where “Array” comes from. That’s a *lot* of caps and good ones. Obviously there’s a lot more to VRM performance than just caps, and it takes testing in hand to know if a board is good. This is really exciting though.

GIGABYTE LGA1200 motherboards for Comet Lake have started showing up for pre-orders, including on Newegg in the US and Overclockers UK in the UK. According to Newegg, the availability date is the 20th of May.

Key prices are as follows:

Bo Pedersen - Dec 3, 2016 0
With the QT03A and the VR2 we present two particularly classy PC cases. The combination of high-quality materials, an exemplary processing and an eye for detail emphasize our products from the gray mass of the case market. In addition to this, we present our first series of fans, the FR-101.
Go to mobile version
%d bloggers like this: