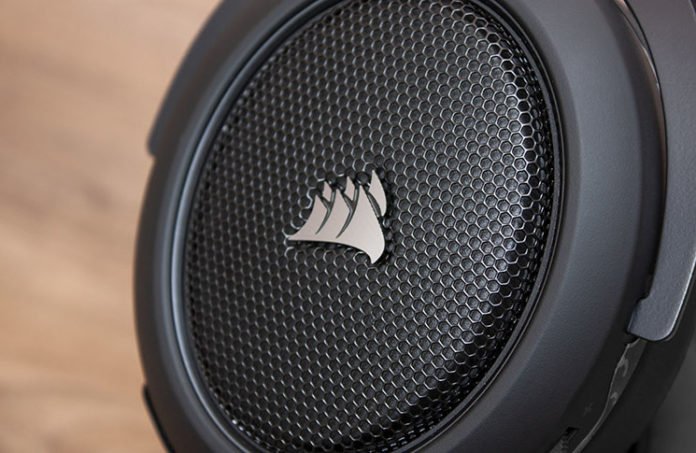 When gaming, sound is an incredibly important factor – in some games it aids in locating your enemy, others it creates atmosphere and can drastically effect your emotions whilst playing. Consequently, having decent speakers or headphones/headsets is essential – with the latter becoming increasingly important when playing competitive online games. Many headsets now have inbuilt microphones, so you can effectively communicate with your teams to let them know the enemy position or your intentions, so they can act on them.

Recently, we have seen an increase of headsets aimed at gamers – no doubt to the popularity of some games like Fortnite, where being able to chat with your squad is essential for those sweet, sweet victories. Corsair are a highly regarded brand who have produced headphones and speakers for donkey years (alongside cases, hardware and other peripherals) and today I will be taking a look at their latest HS70 wireless headset – a different, yet simple headphones and mic combo, that takes a step back from the current RGB craze.

So, as you can see, the HS70 headset does boast some impressive specs, such as 16 hour battery life and 50mm drivers, on top of a unidirectional noise cancelling microphone, which should be perfect for most gamers. So, it seems pretty decent on paper, let’s take a look at a closer look.

Taking a quick look at the box, it fits in line with the current Corsair colour scheme of black and yellow, with the standard brief feature highlight. You’ll notice a lack of RGB badges and colouring. 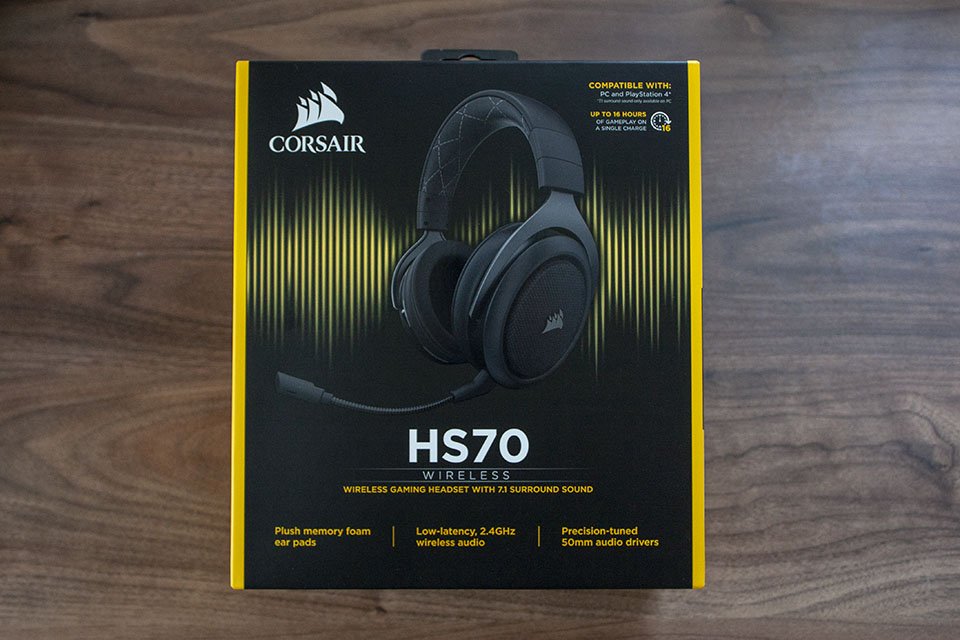 The contents of the HS70 is pretty simple; headset, micro USB cable, mic, USB WiFi dongle and user guide and warranty information. This particular model is in black, however there are other options available (Special Editions and white). 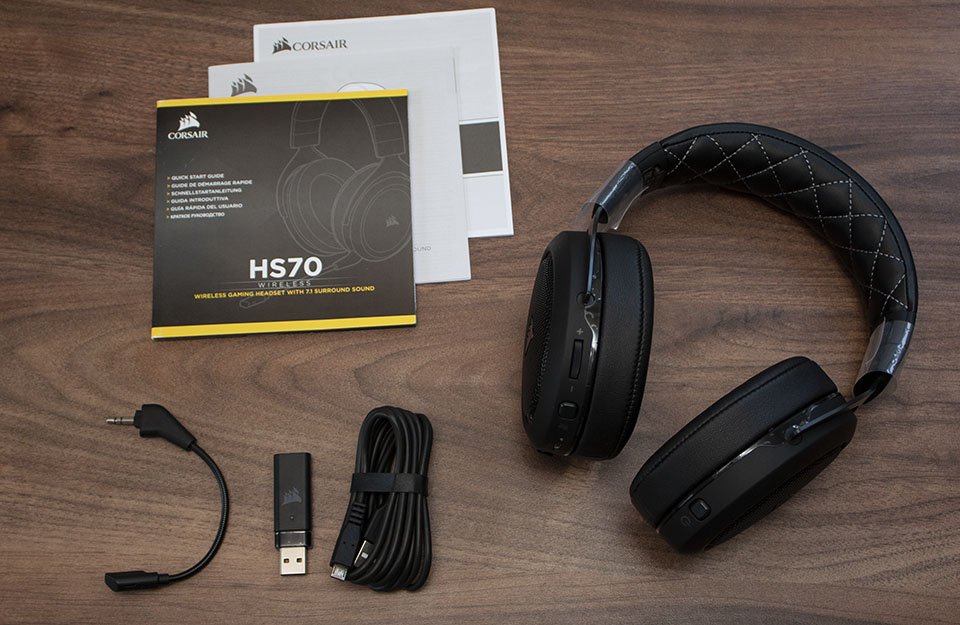 Across the top of the faux leather you have the embossed Corsair type – classy touch. 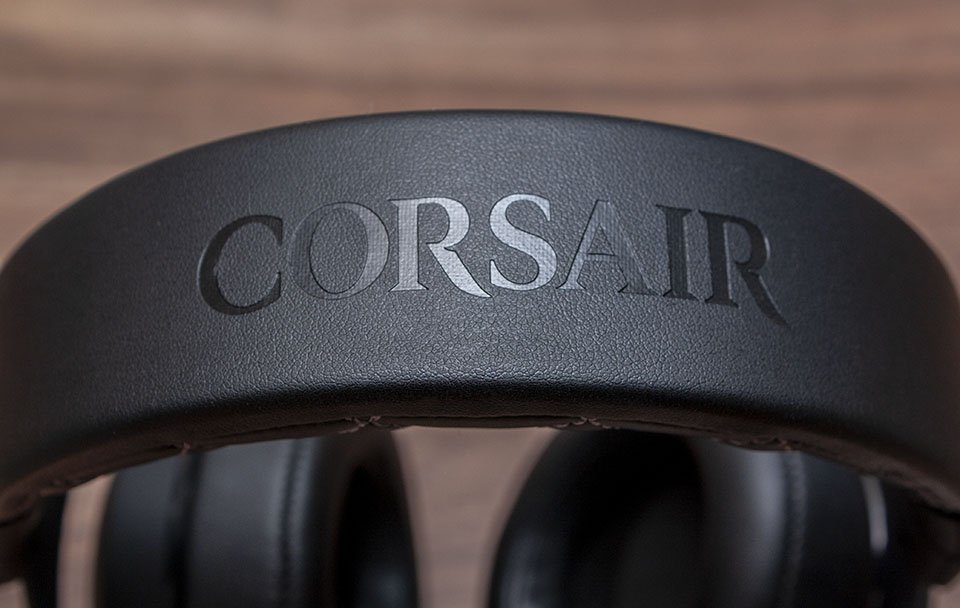 The underside of the headband has white cross stitching, adding to the sleek appearance. 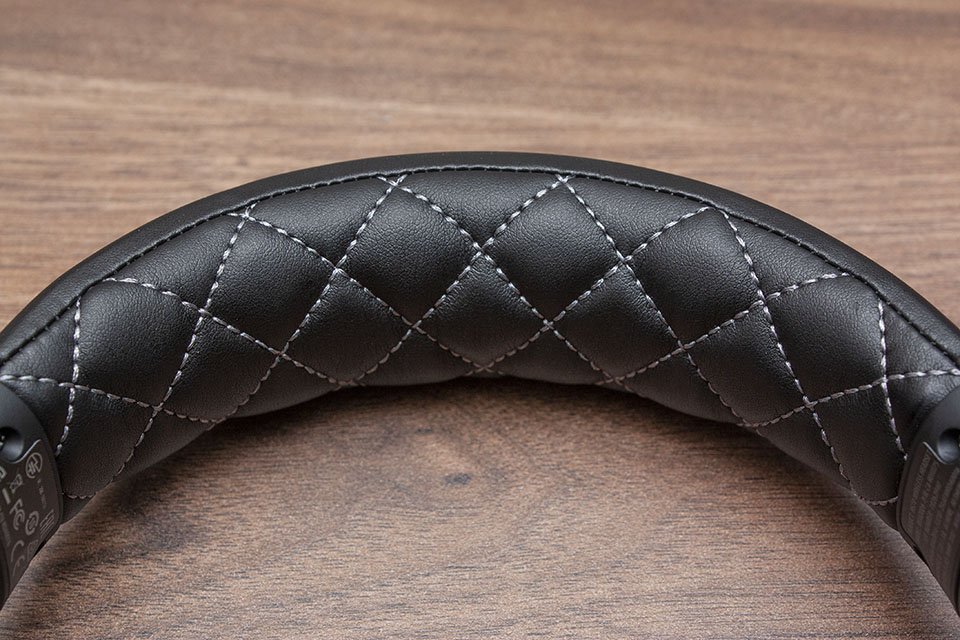 The headband is adjustable and has a metal band inside making it less likely to break, and it is marked, meaning you can easily remember what your settings were in case someone else uses it. 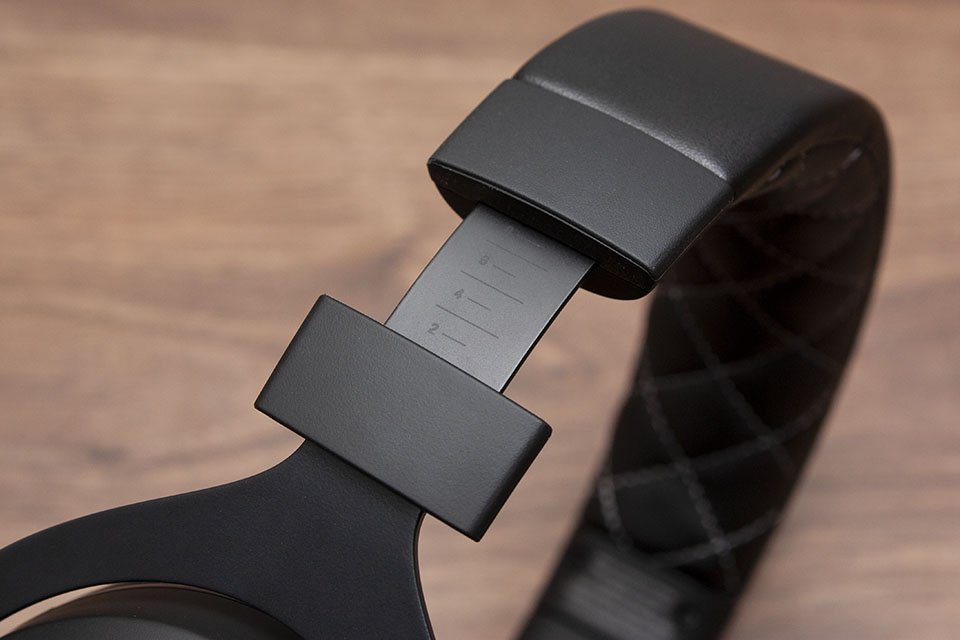 The outside of the ear cup features a gloss black grill with the silver Corsair Sails logo. 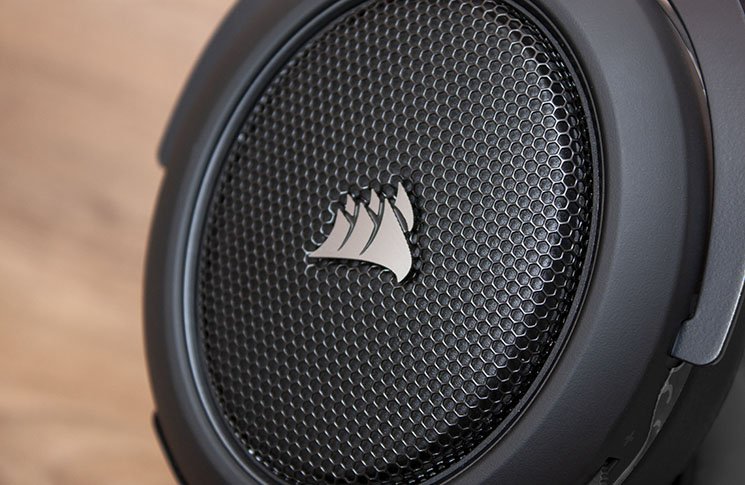 The ear cups are faux leather covered foam, which helps block out ambient noise, but could get a little sweaty during those intense gaming sessions. They are large in size, so should suit most wearers. 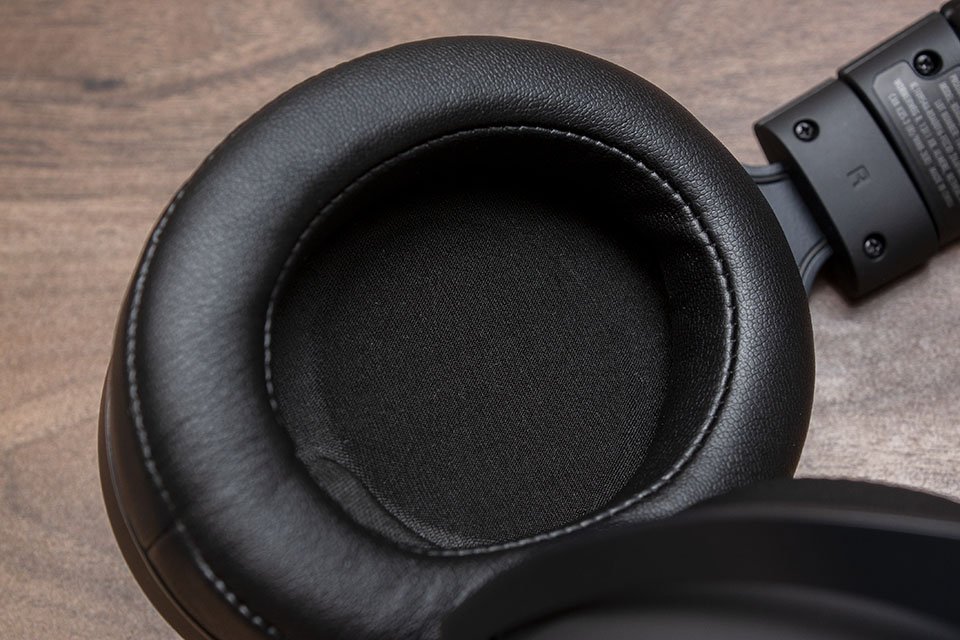 The controls for the headsets are located around the edges of each ear cup. The left side features the volume, mute mic button, status LED and micro USB port for charging and updating. 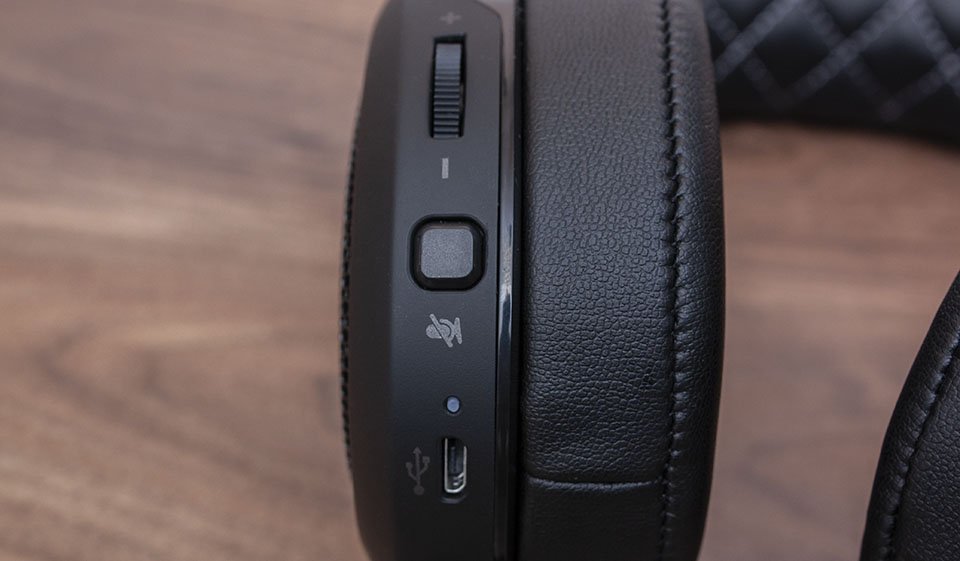 A little further along the left ear cup you have a rubber grommet, which covers the mic port. The use of a modular mic is ideal if you just want to relax and listen to music. 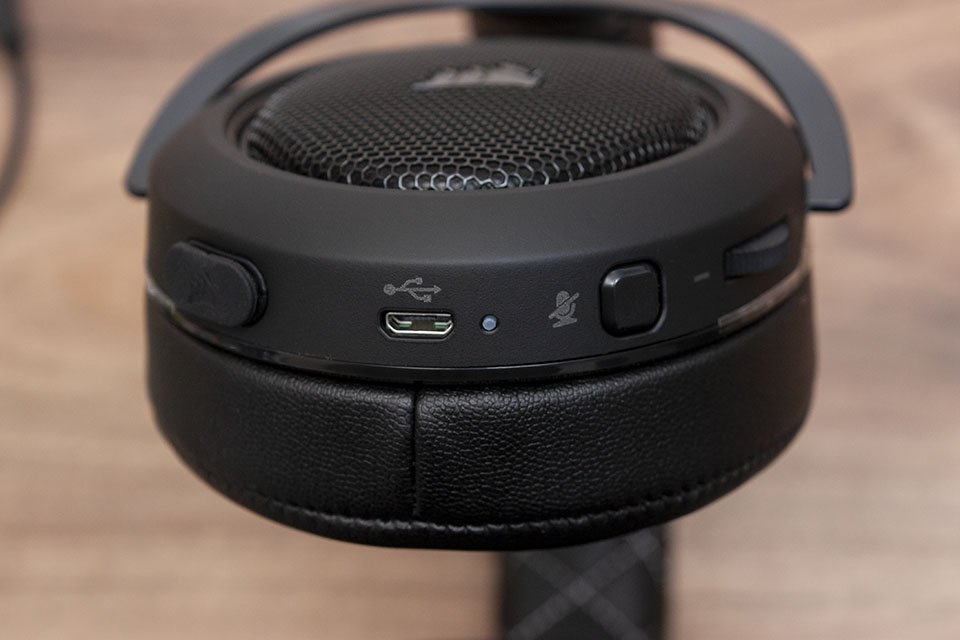 The mic plugs in via a standard 3.5mm jack into the headset. The boom is flexible, but ridged, meaning you can position it at almost any angle and it will stay there. 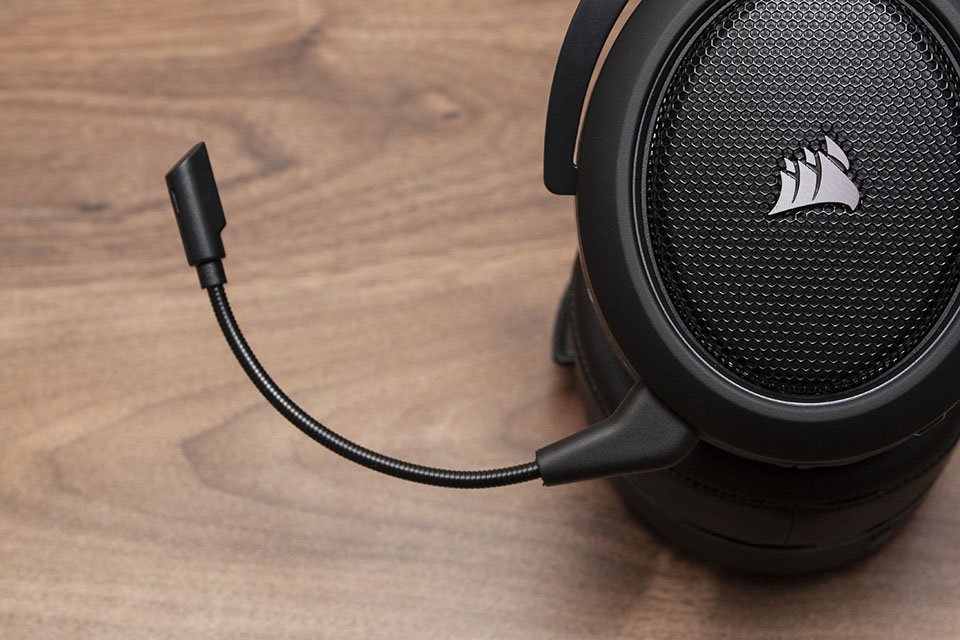 The right ear cup is relatively plain, featuring only the power on/off button. 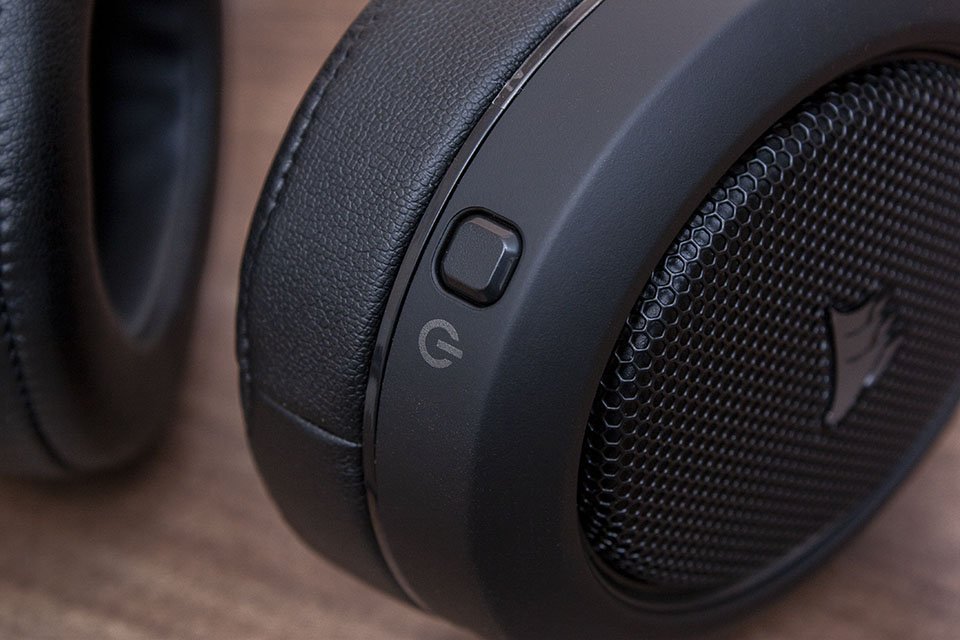 A smallish WiFi dongle is supplied to enable you to use them wirefree. There is a small activity LED and a reset button, which can be used if you experience any connection issues.

The HS70s are compatible with the latest version of iCue, so you can change the settings for the headset in the same program as other Corsair products like K95 keyboards and M65 mouse. From here you can update firmware (below), change EQ settings, stereo mode and setup profiles. 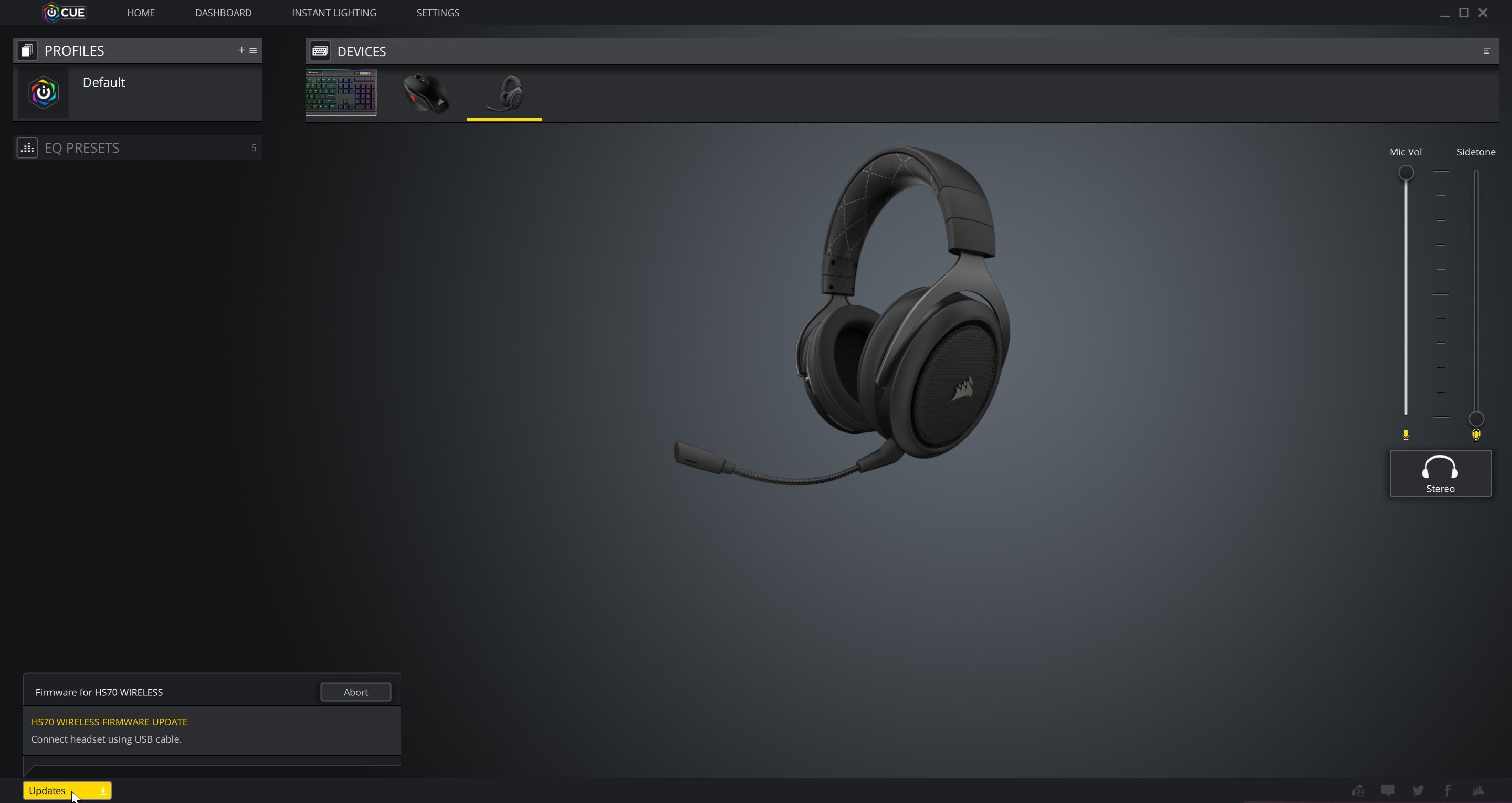 If you’re a bit of an audiophile, but love your gaming, you will often find that you will have to compromise between audio quality and comms – many headsets just use cheap microphones, so whilst you may have good sound, your teammates are often having to decipher what you’re trying to say, which isn’t ideal in the midst of a battle. These headsets are often bundled with RGB LEDs to increase aesthetic appear, however this not only increases the price, but occasionally compromises on quality. With the HS70s, Corsair promise to change this – gone are the LEDs prevalent on the VOID Pro RGBs, which I used previously and in is simplicity and quality.

When I first unboxed the HS70s, I was thoroughly impressed by the sleek and simple look, yet it reeks of quality and has a premium feel to them – and to top it off, they are incredibly light, which says a lot for wireless headsets. The old Vegence 2000s I used back in the day, were massive and weighed a fair amount, resulting in discomfort in little to no time at all.

To get things going, the headset needs to be charged, which is done via the micro USB cable – it doesn’t take long to charge them (typically I just left them overnight when not in use) and I was getting between 6-8 hours of use from them with the volume up fairly loud (I do love my bass). To use them wirelessly you need to plug the WiFi dongle in, which Windows 10 will automatically detect and install the drivers for – although in my instance it seems to have installed the wrong one, which broke the link between the headset, so I had to reset the dongle by using a paperclip to press the reset button. Other than this issue, installation was a doddle and when downloading and launching iCue, it detected a newer firmware and downloaded and installed it right there (only asking for USB connection).

Delving into the audio quality, I am incredibly impressed with the sound the 50mm drivers produce – nice and deep lows, with no dodgy reverberations with clear mids and highs. Blasting pretty much every genre going at them in FLAC format, I didn’t once hear an issue with them, which I must admit, I was expecting for the lows and bass.

When used for gaming, the noise-cancelling microphone was probably the best I’ve used on a headset. The mic boom itself is easily positional unlike that on the VOID Pro RGBs, which only swings up and down. This enabled me to get a decent position so I could be heard clearly by my teammates, but still keep it far enough away so I could drink or eat. Chatting with friends in Skype, Discord and Teamspeak did not produce any issues and my voice was heard clearly throughout all testing. One of the games I tested the headset on prolifically was the popular Fortnite game, as this can strongly rely on directional sounds such as foot steps and gunshots. I must admit, the HS70s blew me away, I could almost pinpoint exactly, the direction sniper fire was coming from, plus enemy footsteps, which I could hear from far away, giving me advanced notice when I was about to be attacked.

Priced at £99.99, they are not cheap, so be prepared to dig deep into your wallet. This is expected with Corsair, as they have positioned themselves as market leaders in terms of quality and features, so to some it would warrant the price tag. There are cheaper wireless headsets on the market, but I have yet to come across some that have the features, build quality and performance of the Corsair HS70s.

So, as it stands, I have yet to come across a headset that performs as well as the HS70s, with the lovely lows and the crisp highs. The design of them oozes quality and the attention to detail is second to none. With them being wireless, you’re not confined to the reach of the cable you often get of wired headsets, instead, you can roam the house with little interference (I was listening to music 2 storeys below my PC). Sure they cost a pretty penny, but I honestly think they are worth it. 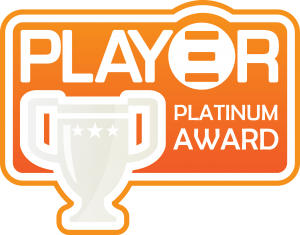 Massive thanks to Corsair for sending a sample of the HS70s in for review. 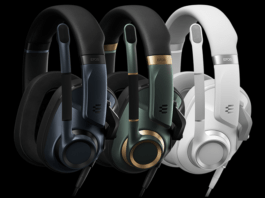 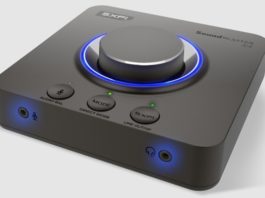 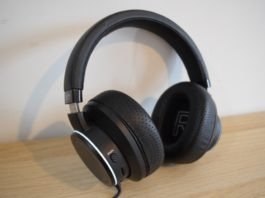