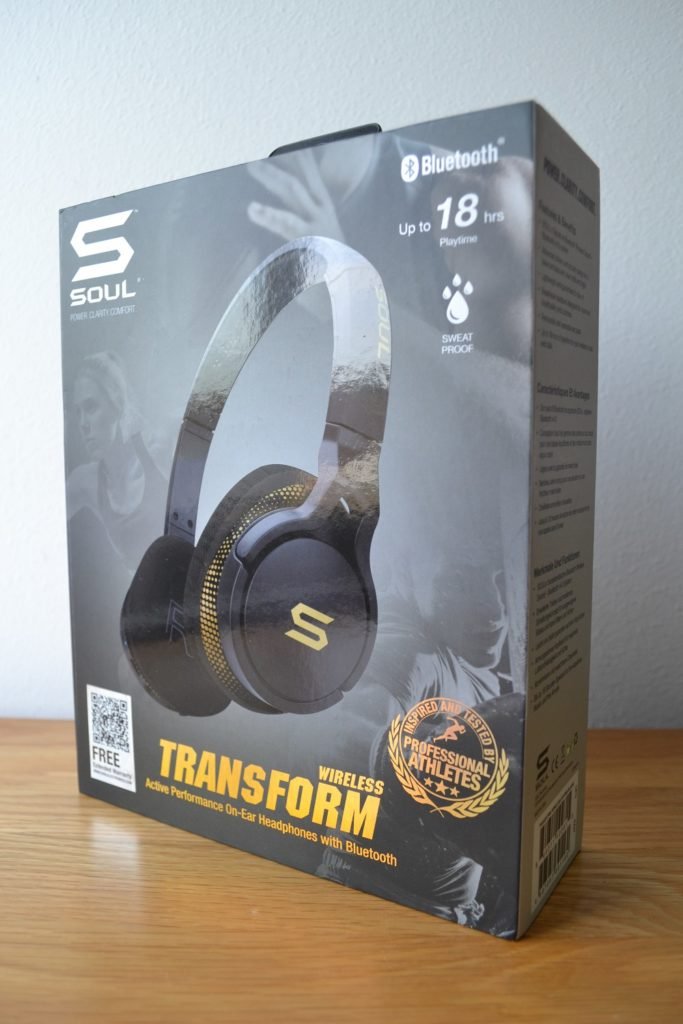 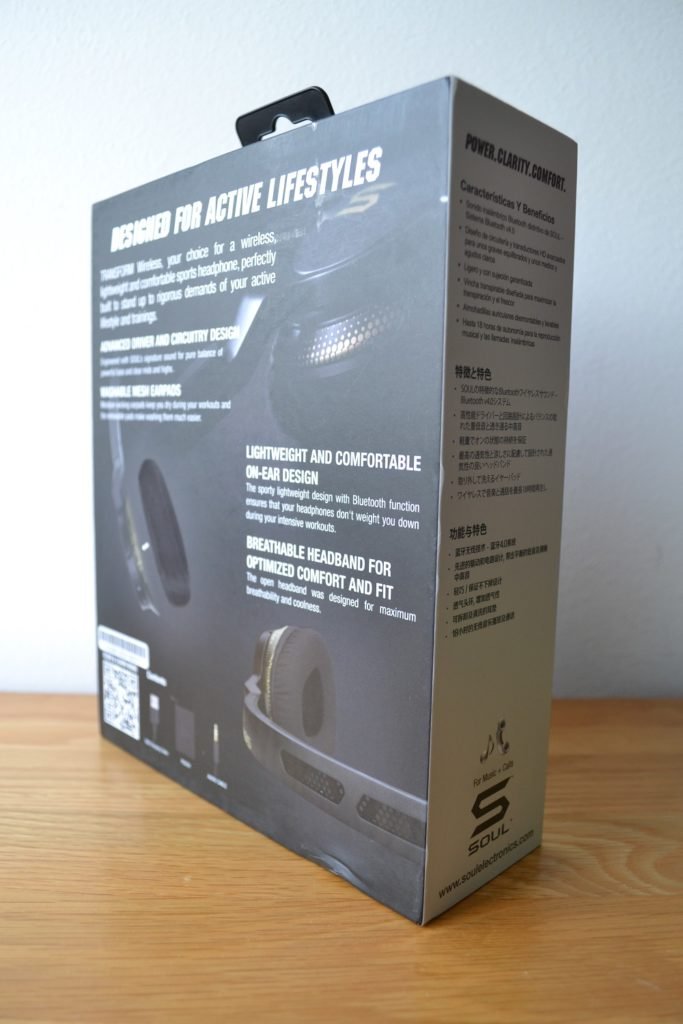 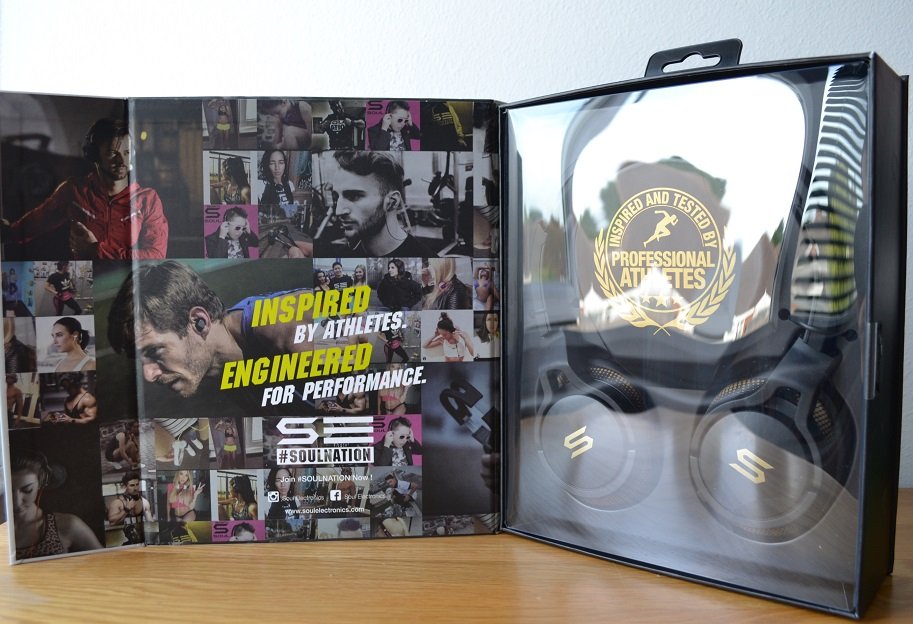 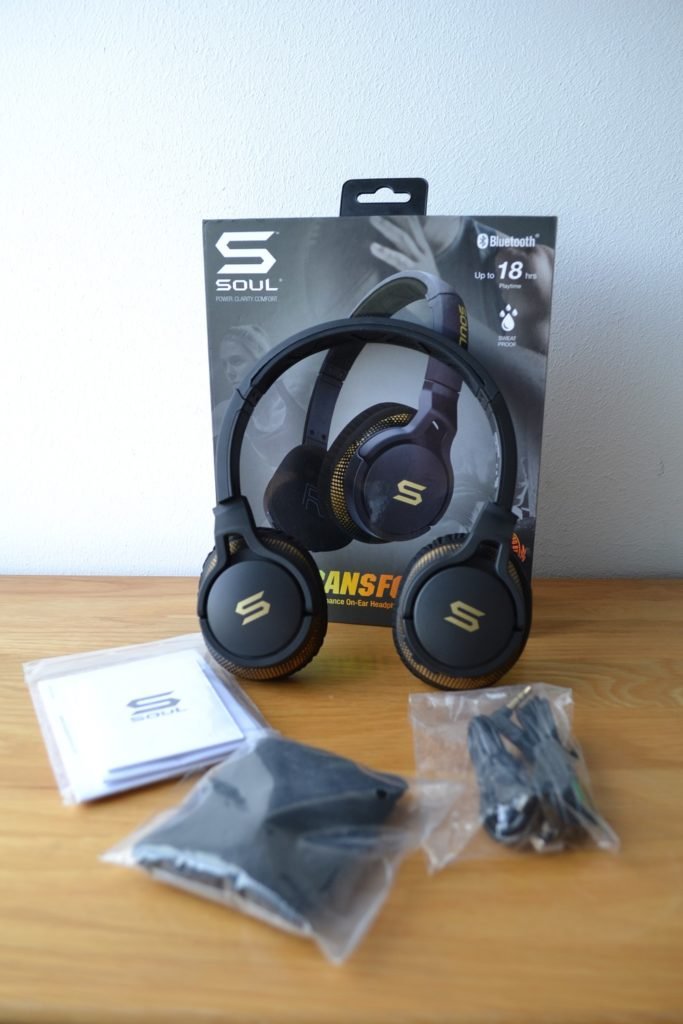 So we’ve got the specifications detailed, the box is all open let’s get down to business then! From the initial hands-on I’ve got to say I’m pretty impressed with the weight, or should I say lack of as the Transform Wireless headphones are pretty light. Even though they are light they feel sturdy and have a decent amount of flex to them which is surprising but they are intended for those of the active lifestyle after all. The ear cups caught my eye as they are labelled L and R which I thought was quite cool and unique way to show which orientation they should be on your noggin. 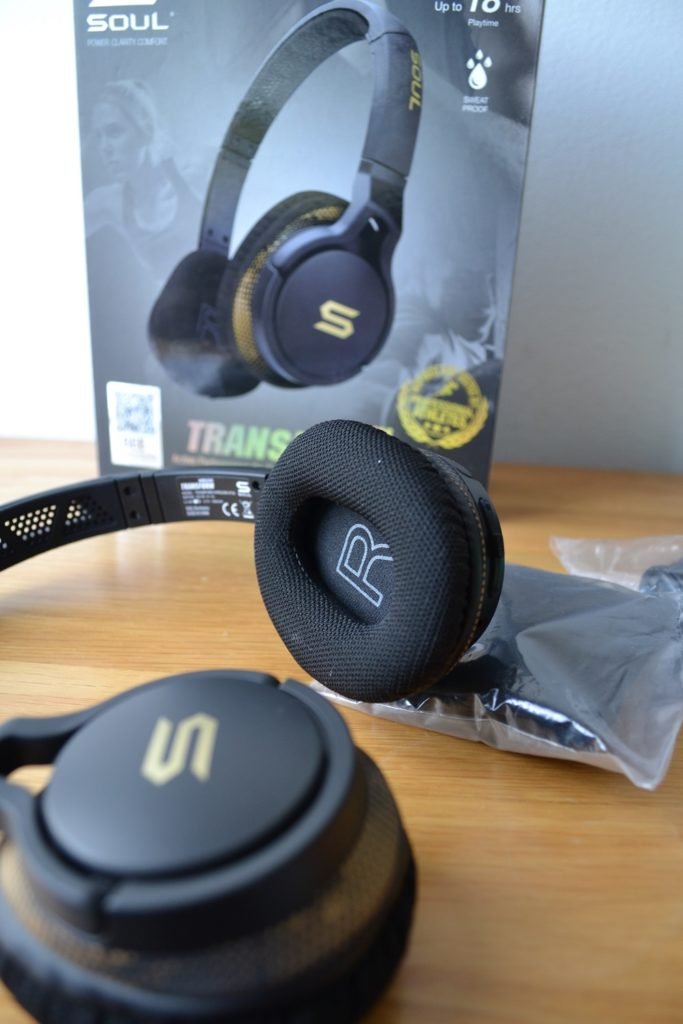 So there are some bits and pieces in the box, you obviously get the USB cable to charge the headphones but there’s also a 3.5 mm aux cable to plug the headphones in if the battery should run out which I thought was really handy. I like the semi-gloss and slightly rubber feel to the headphones which I felt is quite unique and the gold highlights just help to get the Transform Wireless to pop in their own way. The box also has a very handy carry or storage bag to pop the headphones in when you are done using them which is a nice bonus to get. The band over the top of your head on the Transform Wireless is unique with its firm plastic outer layer and the soft rubber inner layer making for a nice but not too snug fit. 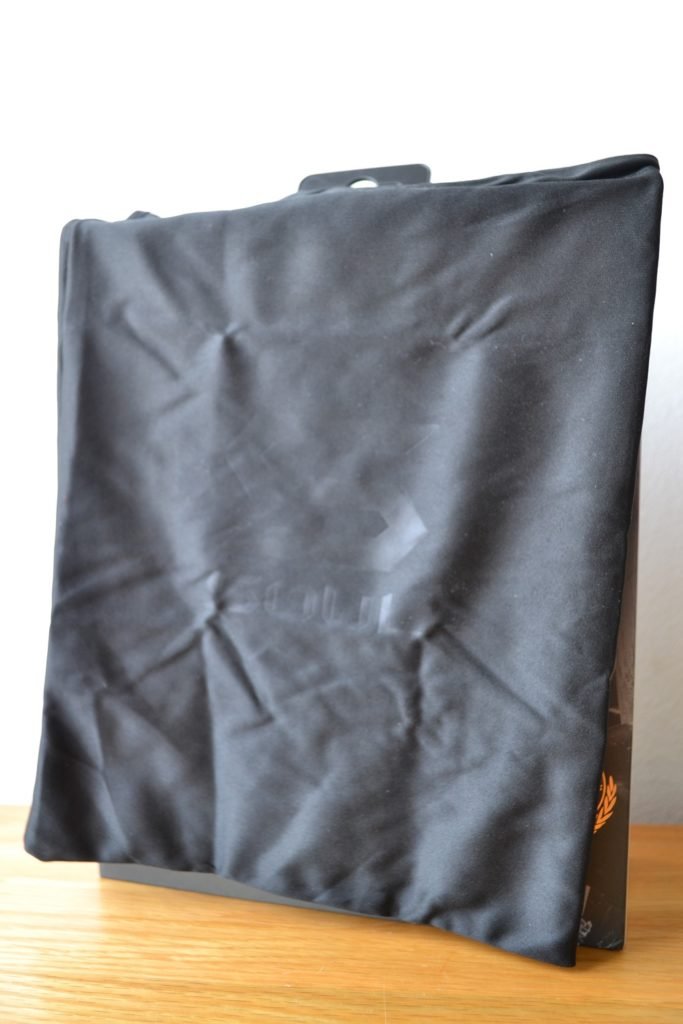 So now we’ve taken a look at the goodies included and the headphones themselves lets see if they are as good for sound as they are for aesthetics, eh? I hadn’t heard of Soul before and I did worry that these were going to look the part but struggle to deliver on the audio side. Of course you always try to start every review with an open mind, so I thought let’s give these the benefit of the doubt and try watching some videos on youtube to get an idea of the quality. It was actually really decent and where I thought the Transform Wireless would struggle with car sounds and such they sounded pretty good and weren’t distorted either which was something I anticipated might happen. I switched over to music and this is where a new favourite genre came into the mix. I have a fellow reviewer to thank for this selection of music and oh boy did they handle the bass and mixture of highs and lows pretty damn well for wireless headphones. In short, the Transform Wireless do indeed deliver and then some! 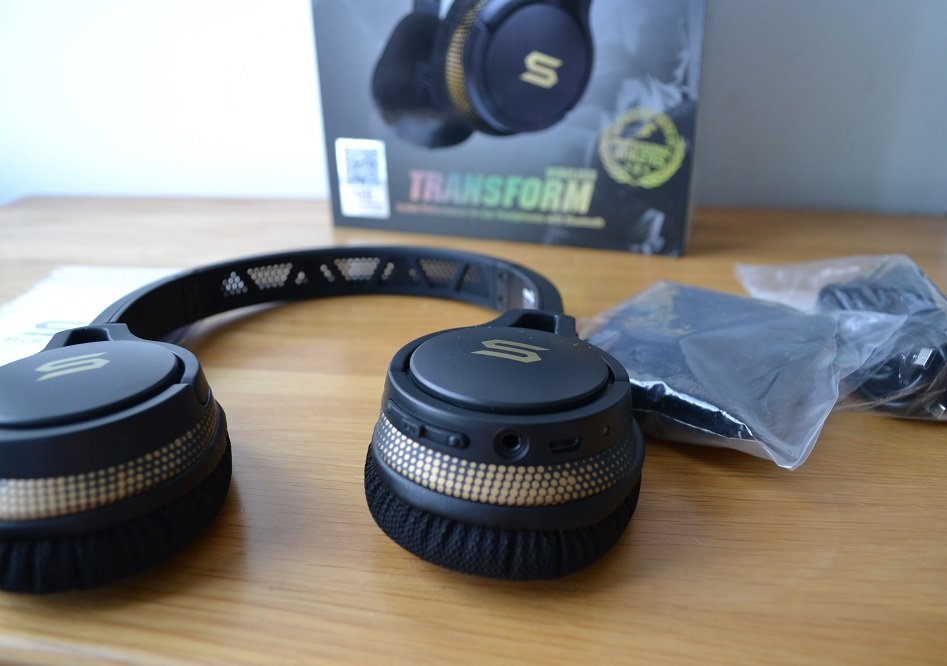 I’m a big fan of the on-ear controls; being wiress, the volume and play buttons are located on the headphones and they have been given distinct shapes to help distinguish by touch which is appropriate because when you can’t see the buttons this helps a lot. The Transform Wireless can also become the Transform Wired with the aux lead included and this is ace. There isn’t any noticeable difference in the quality of sound pumped out by them, that actually impressed me as I expected to notice some change but if there is I can’t tell at all so mighty fine work on that one Soul! Overall for wireless headphones the Transform Wireless from Soul really do impress and that’s no easy feat with how saturated the wireless headphone markets has become since more and more devices are getting rid of the 3.5 mm jack to get thinner and thinner. I only had one bugbear with these and the bag they stow in, I feel that if they folded in toward the middle of the headband it would make for a sturdier form factor when popping them in your bag as they stay in a headphone shape. As they are, I rather expected that the headphones would get damaged quite easily but they seem to have stood up to me dropping them accidentally a few times so they certainly are pretty sturdy. 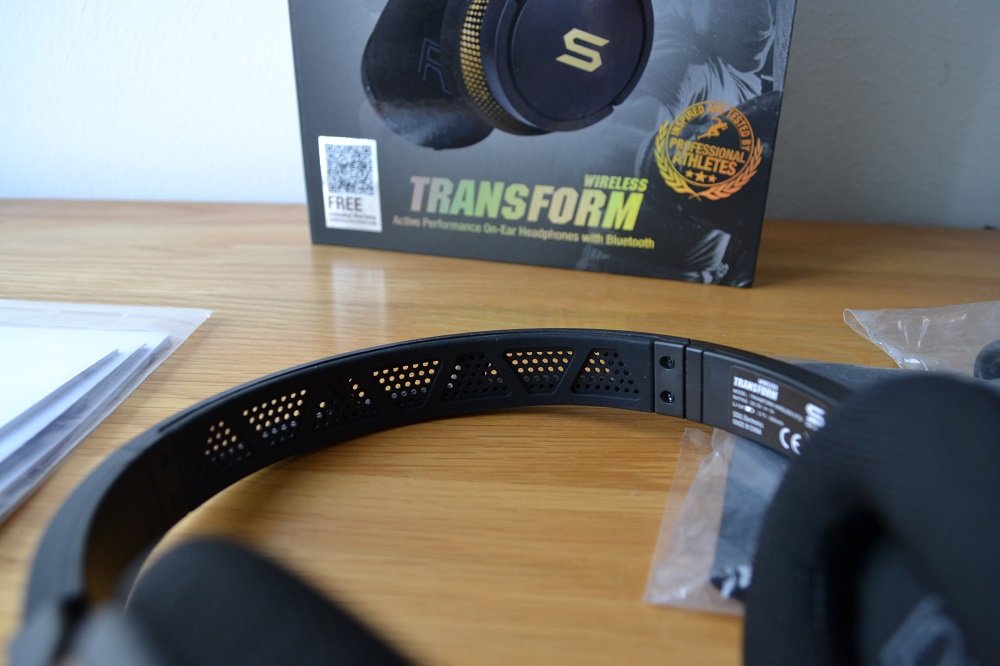 So I guess it closing words time now then and for a brand that I hadn’t heard about until these arrived in my mitts, I’m happy to say they are mighty fine. The Transform Wireless are really good but I have had trouble trying to find these anywhere online other than from Soul direct and they retail on their Site for $99.99 which for some high-quality Bluetooth headphones that are sweat resistant is a pretty good price bracket. I thought these would rock in at a higher price than that but for what you get its relatively good value for money which is ace. I’d definitely recommend the Transform Wireless if you are looking for some hard wearing and lasting headphones that have really top notch sound quality too.  So my award for the Soul Transform Wireless has to be the performance award because these bad boys really do perform and are surprising too! 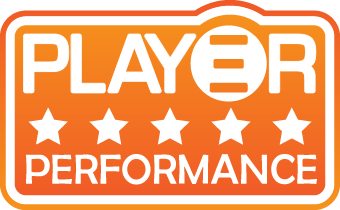 Do let me know if the Transform Wireless have tickled your fancy and if you bag a set for yourself? Take it easy and catch you in the next review folks.

As alway I’d like to thank Soul for sending the Transform Wireless in.

Still interested in Audio? Take a look at these recent reviews.

Play3r - Aug 20, 2013 0
For review we have Logitech's latest wired gaming mouse - the G500s, with extra features compared to the more expensive G700s it should be interesting.
Go to mobile version
%d bloggers like this: