A few weeks ago I built a whole system using the NZXT HUE2 range of products, and the end result was nothing short of RGBtastic! One thing that played on my OCD tendencies however, was that whilst the CAM software did a great job of controlling the NZXT products, there was no way to completely sync the MSI motherboard and GPU in with the lighting effects (or add RGB products from any other manufacturer for that matter).

That got me thinking… could I build a system where every RGB element was controlled by one piece of software? And if so, which companies were “compatible”? 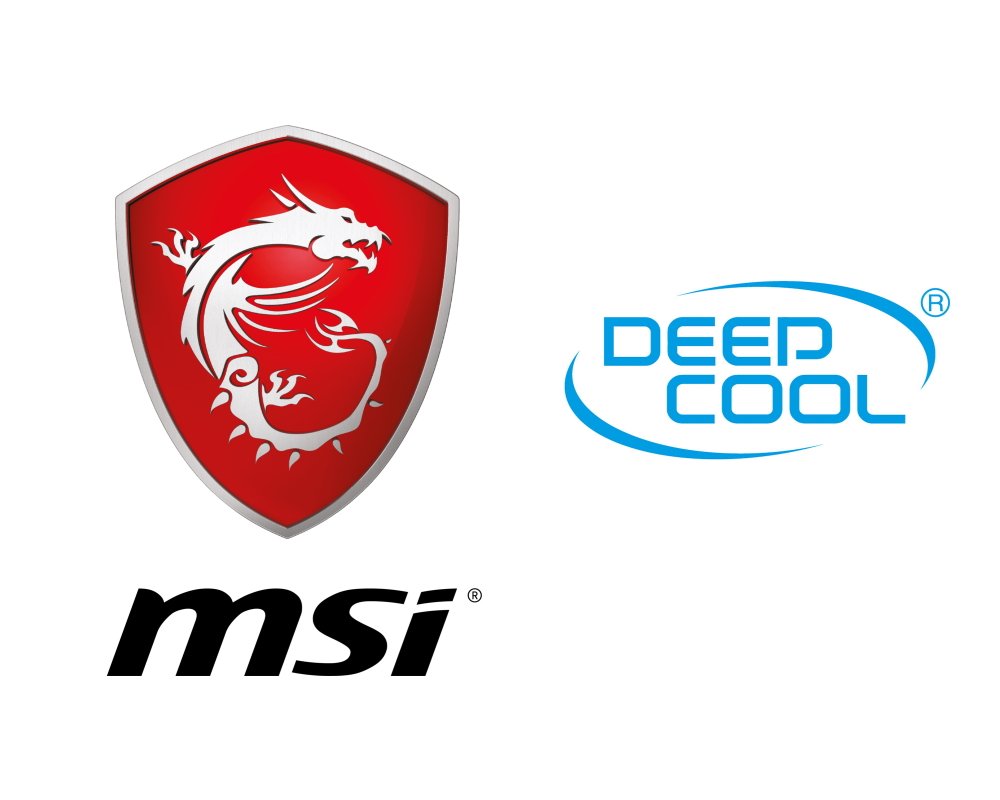 After lots of planning, 2 companies stepped forward and agreed to help with this build. Everything in this article going forwards could not have been achieved without MSI and Deepcool. A massive personal thanks goes out to both.

So, we had the companies, now we needed actual products. The NZXT build was pretty high spec, boasting an Intel i9 9900K, and the MSI Duke RTX 2080 Ti. I wanted this build to go one stage further from a gaming perspective – not only full RGB synchronised, but with more power… the most powerful gaming system we had EVER built! 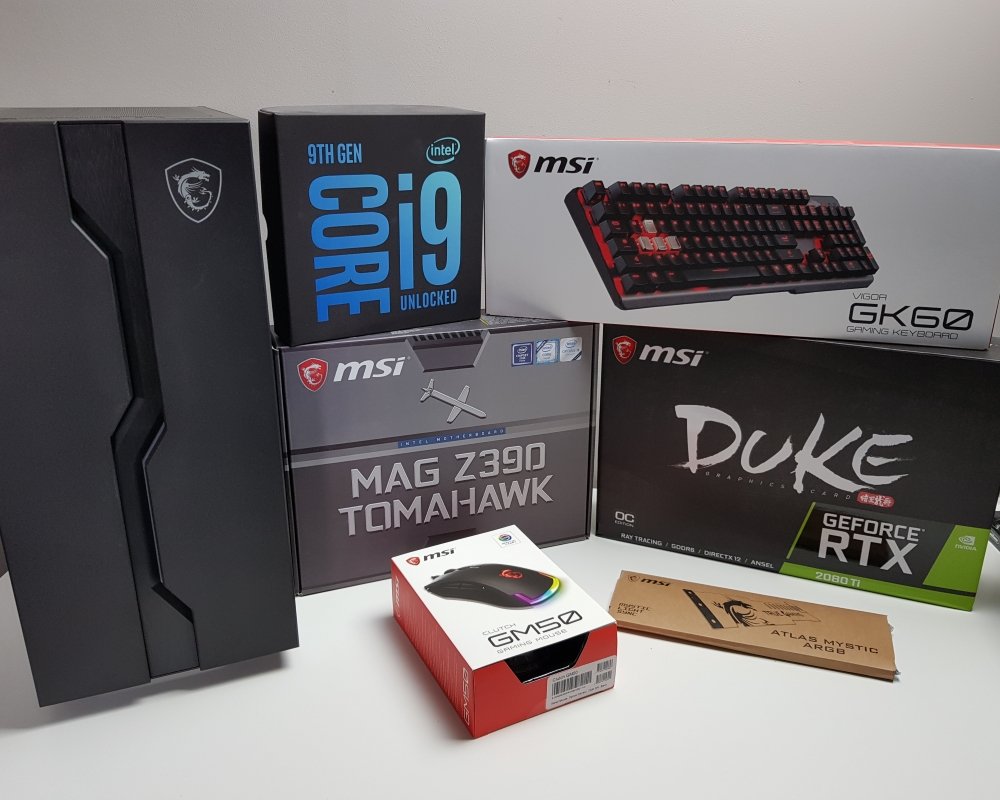 Obviously, there was no further upgrade to be had on the MSI Duke 2080 Ti that we had used previously, but to add even more RGB, MSI offered up one of their brand new Atlas Mystic GPU support brackets.

So, what about the CPU? I wanted to go mainstream, and with an Intel i9 9900k already on hand, that was a no brainer. 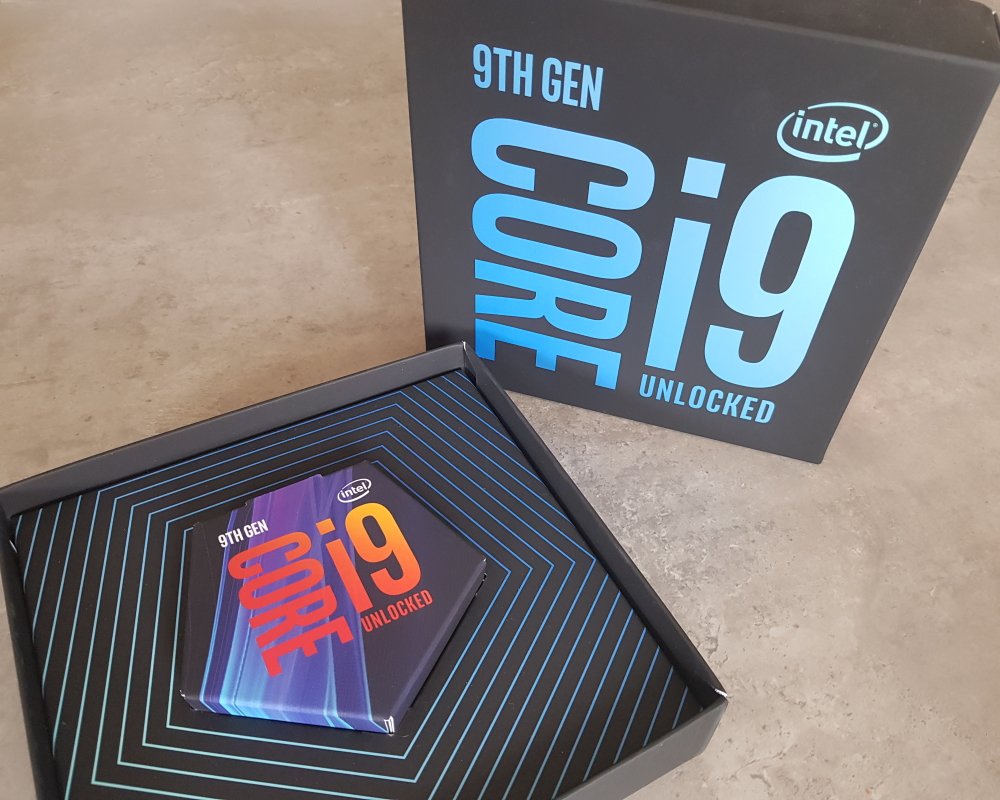 To complement our CPU, MSI came forward with the MAG Z390 Tomahawk. Whilst not the top of the range board, the Tomahawk models have long been huge fan favourites. The last iteration of this line of motherboard was the B450, and Dave H presented it with our Gold Award. Importantly, the RGB elements of the board would be controlled by the MSI Mystic Light software, so that box is well & truly checked. 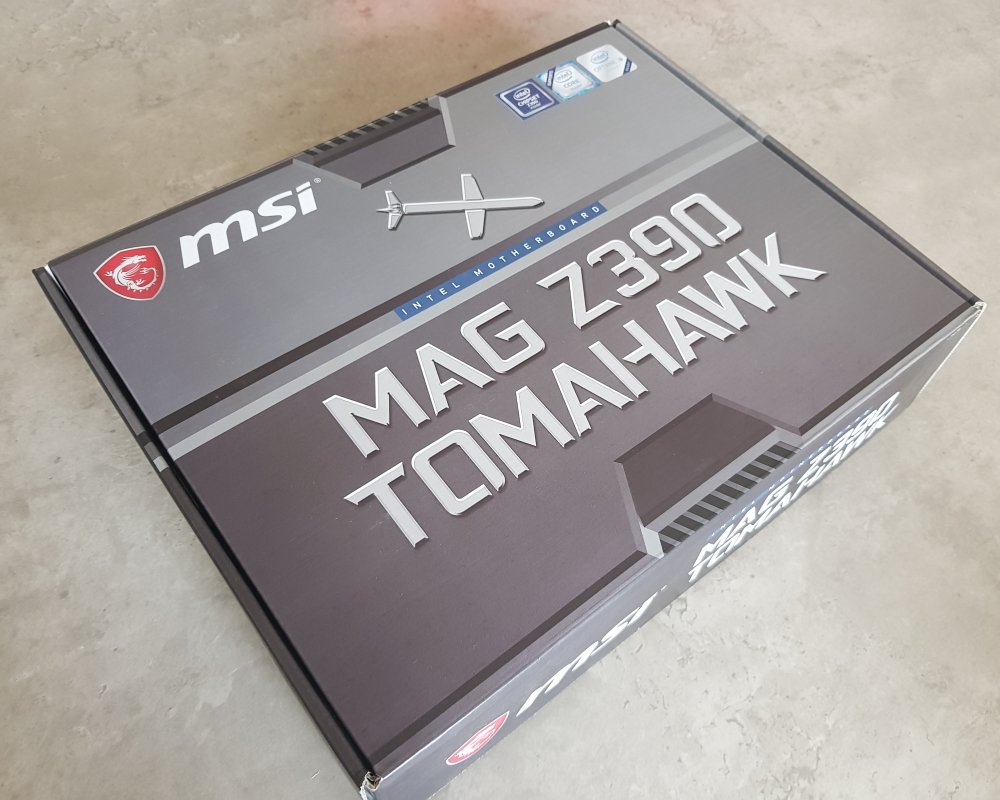 The case was a bit of a head-scratcher to begin with, especially because if we wanted RGB built-in, it wouldn’t be controllable with Mystic Light. MSI sent us the first of their new Vampiric 010 cases to hit the UK shores. Whilst not hooked into the Mystic Light software, it kept the theme of the build very MSI centric. 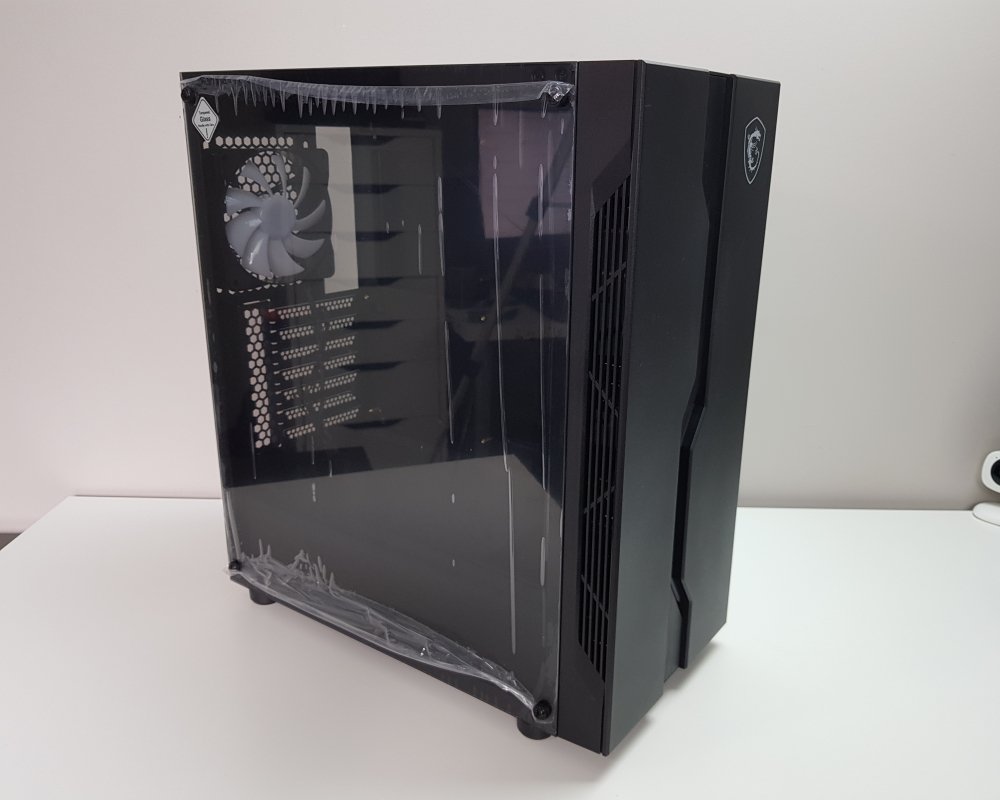 To finish off the MSI contribution to this EPIC build, they sent over their Vigor GK60 keyboard and the Clutch GM50 mouse. 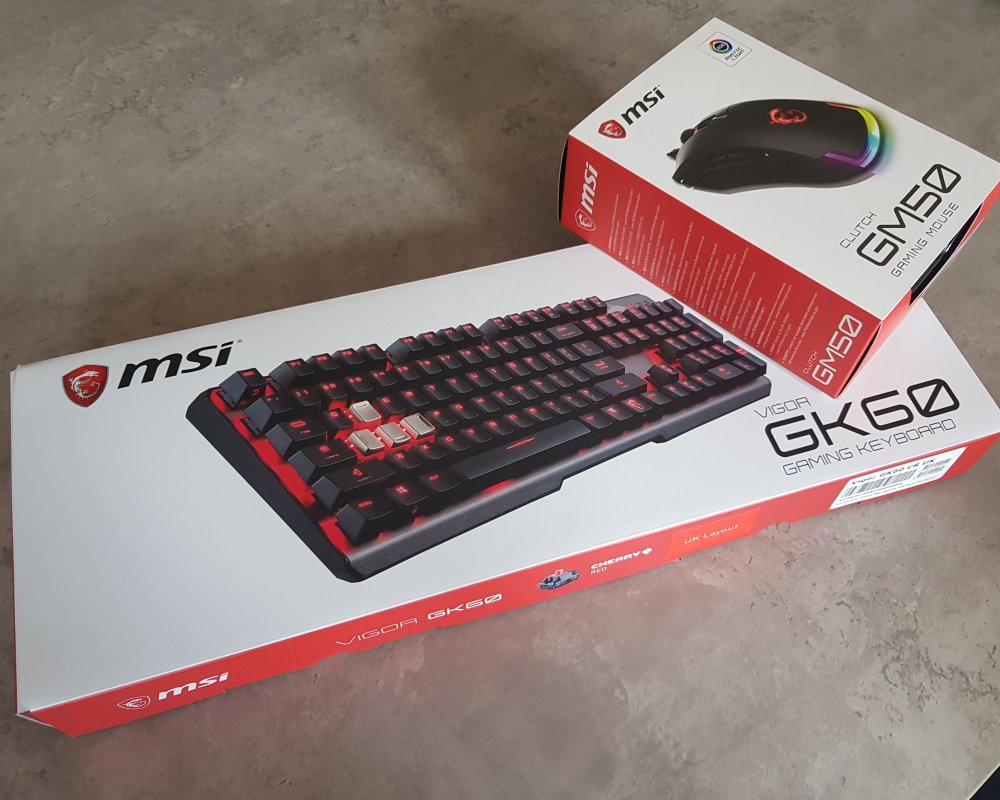 Having exhausted MSI’s generosity in the RGB product stakes, we needed some cooling products – namely case fans and a CPU cooler – but they had to be compatible with Mystic Light. Deepcool stepped forward, providing their Captain 240PRO from their Gamer Storm brand, along with two 3 fan starter packs of their CF120 Addressable RGB case fans. Rounding off the Deepcool contribution was an RGB 200PRO ARGB LED strip kit… just in case we didn’t have enough RGB already!!! 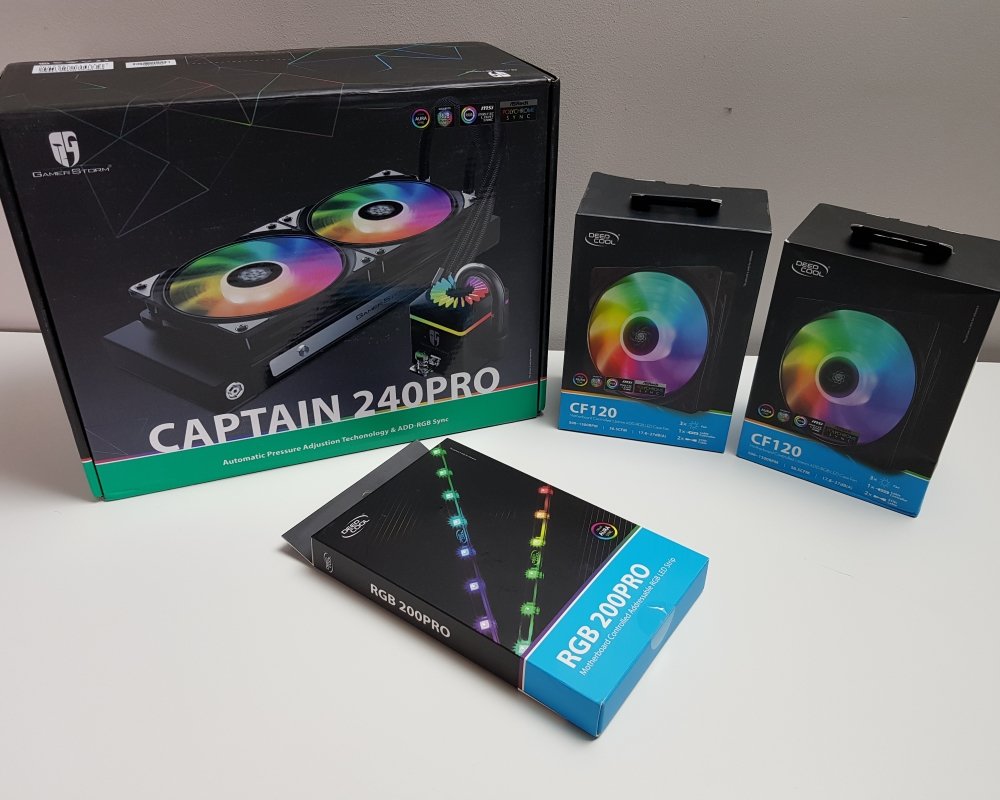 Not to be outdone, I personally contributed the RAM kit from my own personal rig in the shape of the Ballistix Tactical Tracer RGB 4 x 8GB DDR4. The fact that this is branded as being Mystic Light compatible meant an opportunity to add EVEN more synchronised RGB to our EPIC RGB build. 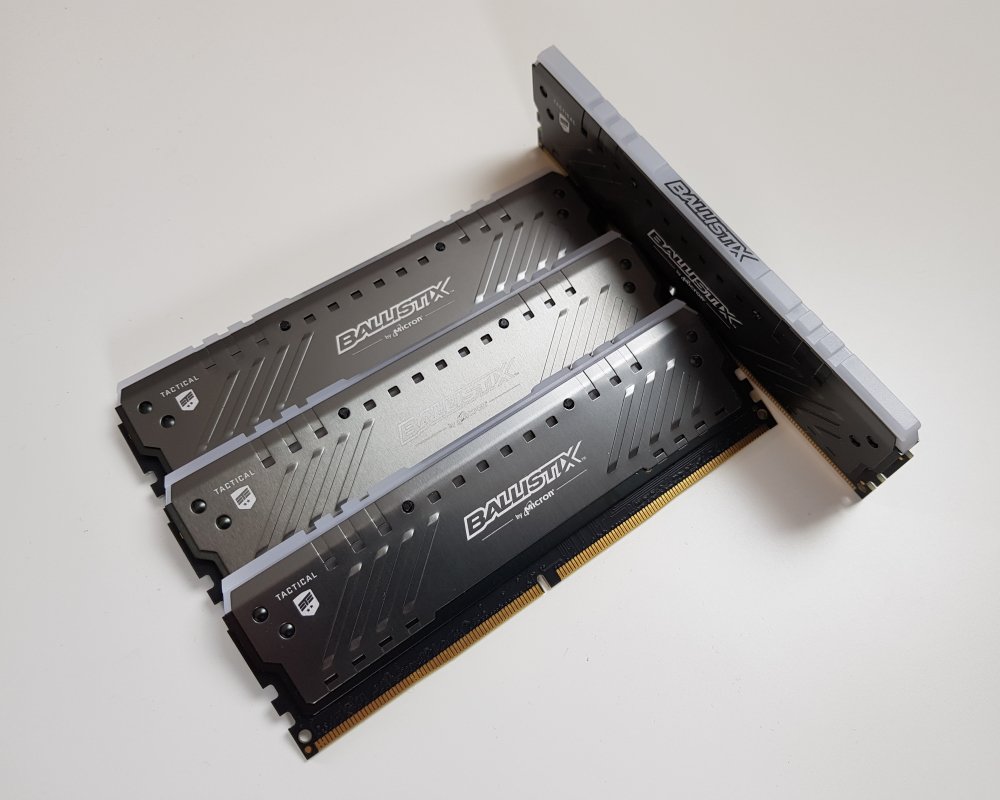 Finally, as the PSU wouldn’t be visible in the Vampiric 010, it didn’t really need to be RGB enabled… but it was anyway! I used the Thermaltake Toughpower Grand RGB 850W. 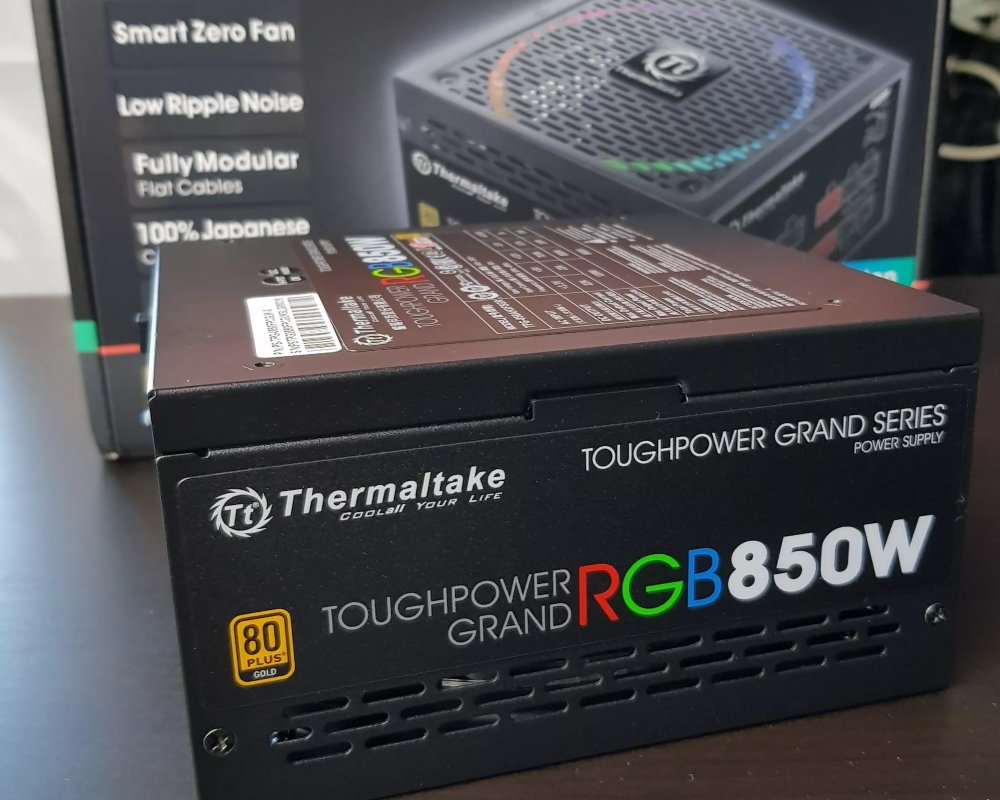 Our Best & Most Powerful RGB Gaming Build EVER: The Finished Article 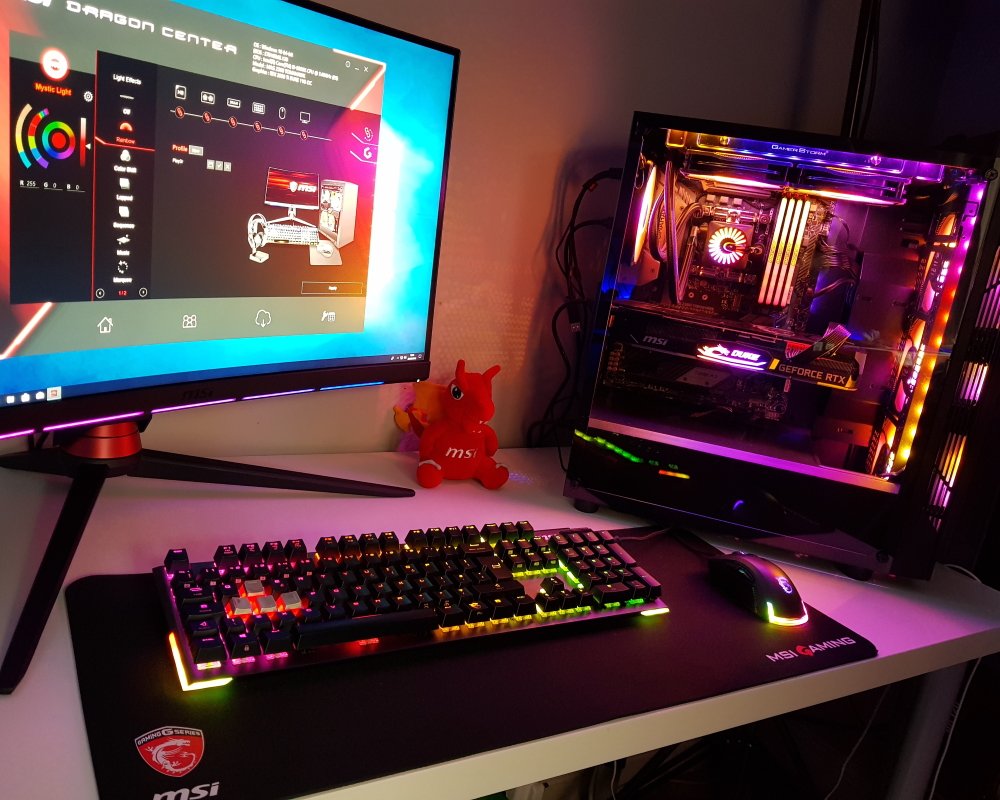 For the eagle-eyed amongst you, you will notice a couple of slight tweaks to the final build from the original parts list. Firstly, the keyboard… the original plan was to use the MSI Vigor GK60… until I realised it wasn’t RGB! #FAIL!

I replaced this with the MSI Vigor GK80, and all RGB was restored. 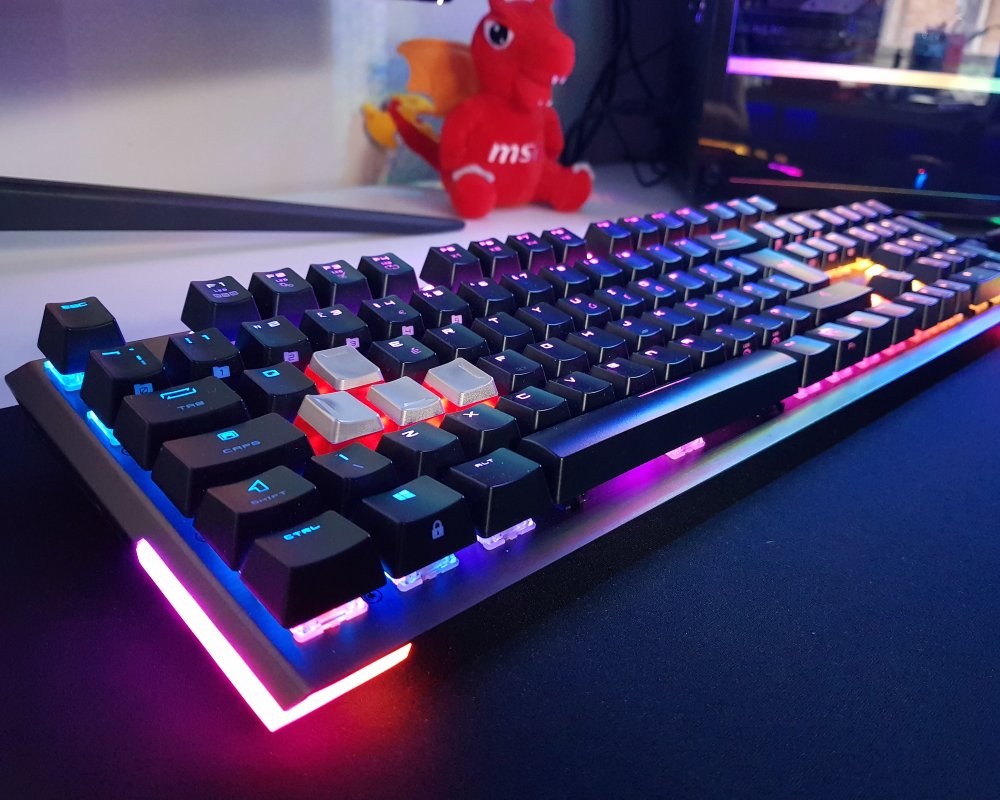 Secondly, I was unable to use the MSI Atlas Mystic GPU support bracket, it couldn’t be fitted into the case due to the nature of the design of the PCIe guard. I promise I will include this on a future build though and show everyone what it looks like.

Having said that, the MSI RTX 2080Ti Duke is such an amazing card aesthetically it really didn’t need any further bells & whistles to make it stand out as the star of the show.

Added to the build was the MSI Optix MPG27CQ monitor to complete the full RGB setup. This monitor is actually my own personal display, and I use it on a daily basis.
Full specifications are as follows:

We previously reviewed the MSI MPG27C late last year, and the MPG27CQ takes everything that made the previous monitor great and adds in the 1440p resolution that was the only thing we suggested could be improved upon.

I have had the privilege of using many different monitors in the past, but I can honestly say this is the best yet… hence why it is my own personal daily display panel. Given the fact that it can currently be picked up for just £399 in the UK right now, I’m going to use a little bit of editorial licence now, and award it our Play3r Platinum Award… I think that highly of the display! 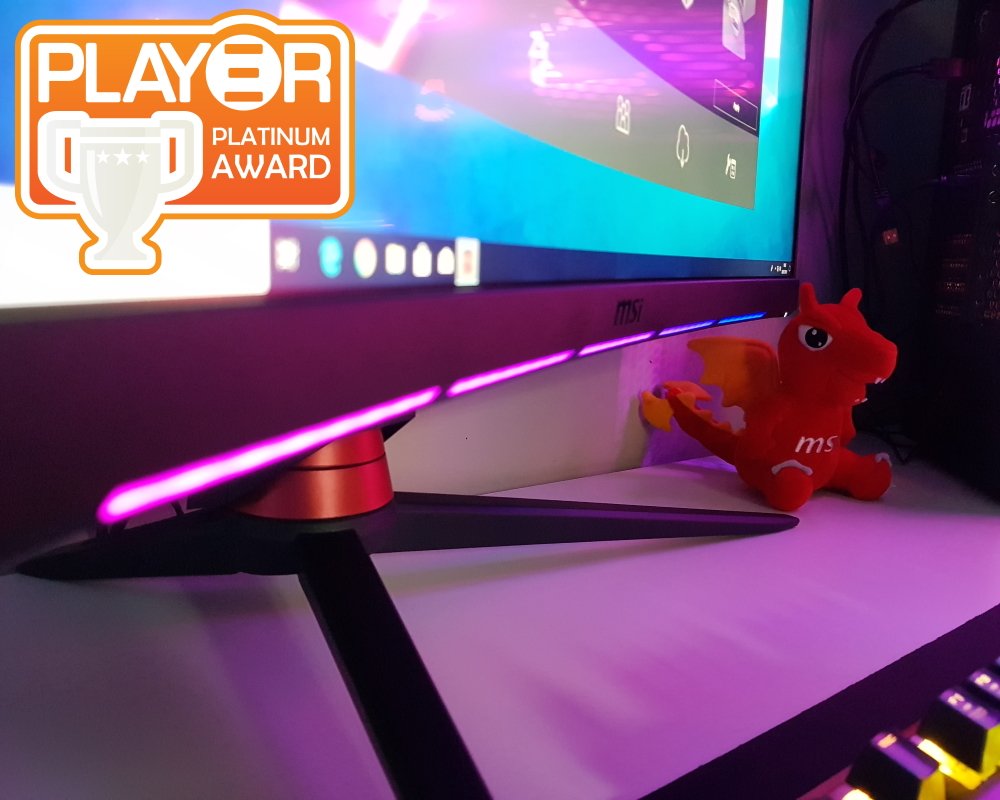 I am a huge fan of the Tomahawk series of motherboards, as I love their understated, rugged appearance. The Z390 variant I used in this review was reviewed in full by me just last week and rightly walked away with our Gold award. My only hope is that MSI doesn’t tweak it too much with any future chipset releases, as I personally love this model. 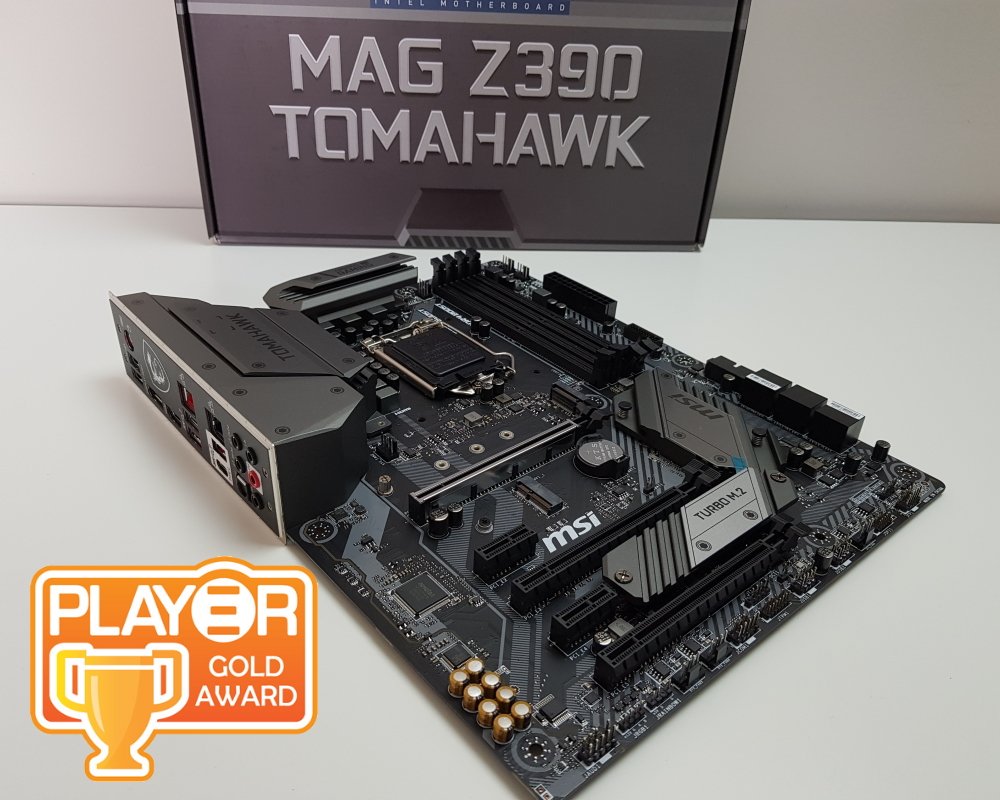 Finally, a shout out for Deepcool / GamerStorm that completed the final look. I have already reviewed the Captain 240PRO earlier this year and gave it our Platinum award. The CF120 fan kit and the RGB 200PRO lighting strips sync perfectly with Mystic Light as claimed. Worth noting is that the fans make very little noise even when pushed to the max. The fact that these Deepcool components work with all of the main motherboard manufacturers means that I would recommend them for anyone wanting to build a fully synchronised setup, whatever your choice of vendor for your main components. 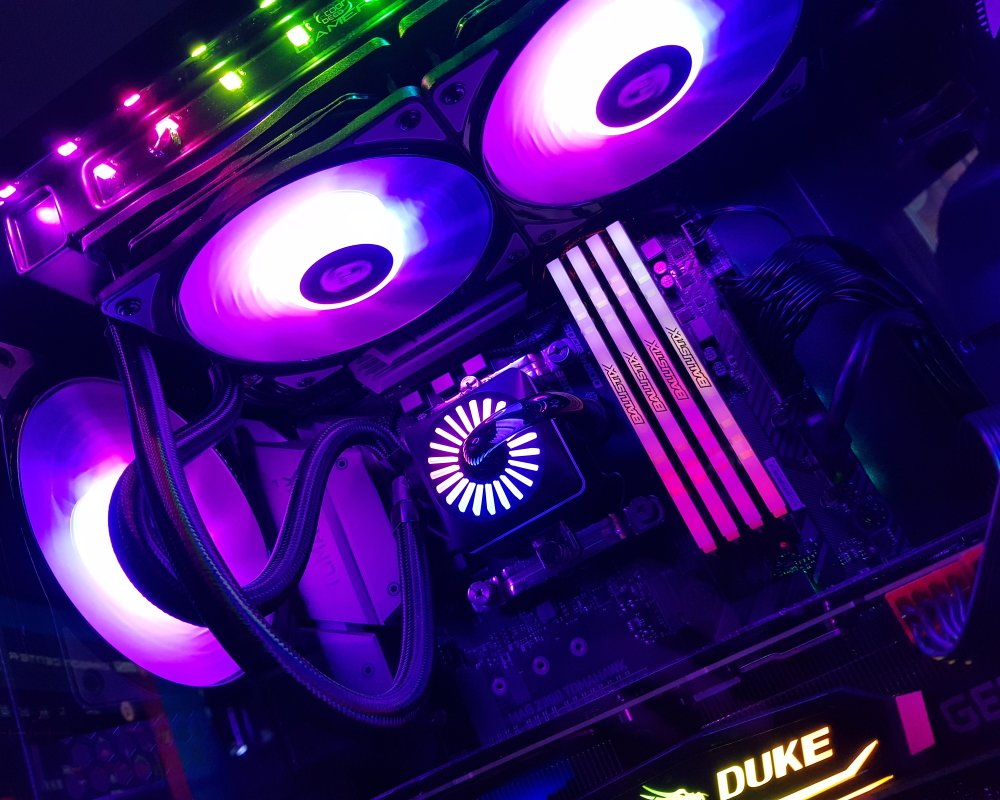 I’m going to stop writing now as I could go on forever. Obviously, I am biased as I built the system, but the end result is stunning! Just one final thing to note that was vitally important when constructing this build.

With so many elements requiring an ARGB 3 pin connection to the motherboard, there will never be enough onboard headers. The Tomahawk only has one header, so to make this work the guys over at Overclockers UK hooked me up with the XSPC Addressable RGB Splitter Hub. This hub creates 8 headers for you to use, and in this build worked flawlessly. At just £10.99 it’s an absolute no brainer, and I was surprised to find that very few types of this product are available. 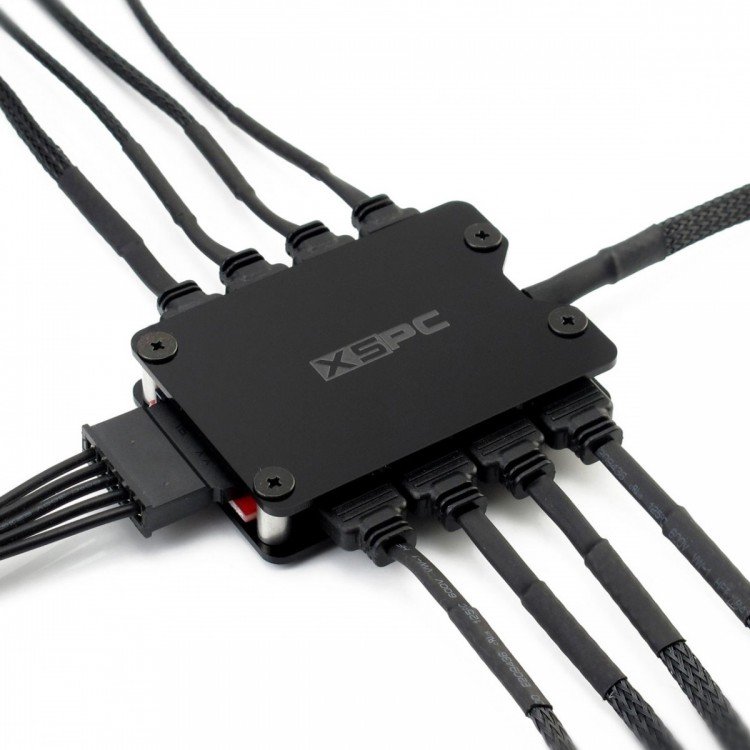 To finish off this piece, here is a quick video to give you a flavour of it in action. Thanks for reading, and see you all soon.

Personal thanks to both MSI and Deepcool for providing the majority of the components for this build. You guys ROCK!

If you would like to buy any of the products featured in this build, here are a selection of the cheapest place to buy in the UK at the time of writing: 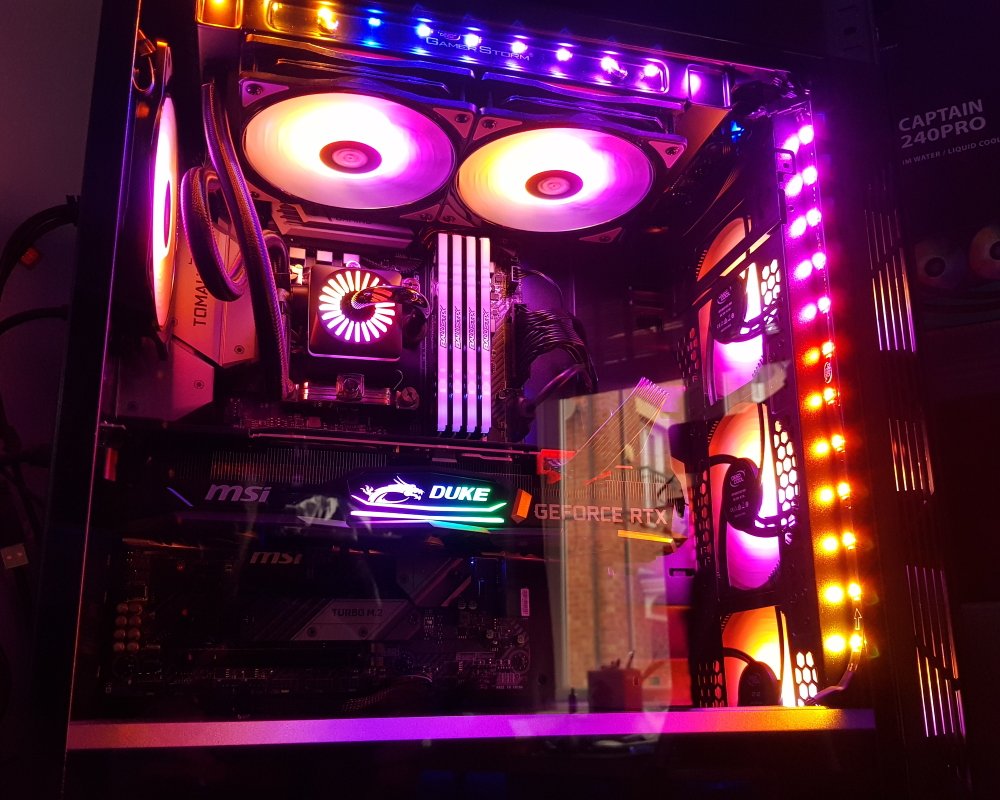 Play3r - Oct 13, 2014 0
Today I take a look at the MSI GT70 2PE Dominator Pro gaming notebook. Following on from our previous review on its predecessor the GT60 2PE I see how it stacks up against the competition and see if the new advances make it a worthy purchase.
Go to mobile version
%d bloggers like this: