In a sudden reversal, AMD have announced that their future Zen 3 CPUs will be able to run on B450 and X470 motherboards – but there’s a catch. The incompatibility was for a good reason, and working around it has a cost. B450 and X470 boards upgraded for future socket AM4 CPUs will lose support for older chips.

This is the second such kerfuffle in as many years. In 2019 there was a lot of concern about the status of B350 and X370. Back then, MSI was forced to issue a statement reassuring people that their boards would support Zen 2.

Less than two weeks ago, AMD announced the future of the AM4 socket: upcoming CPUs like Zen 3 would not work with B450 and X470 motherboards. The community did not take this well. B550 is so late that B450 had become the to go-to for budget builds with Zen 2. Therefore, users pairing a Ryzen 3600 with a B450 board effectively didn’t even get a single generation of upgrades. 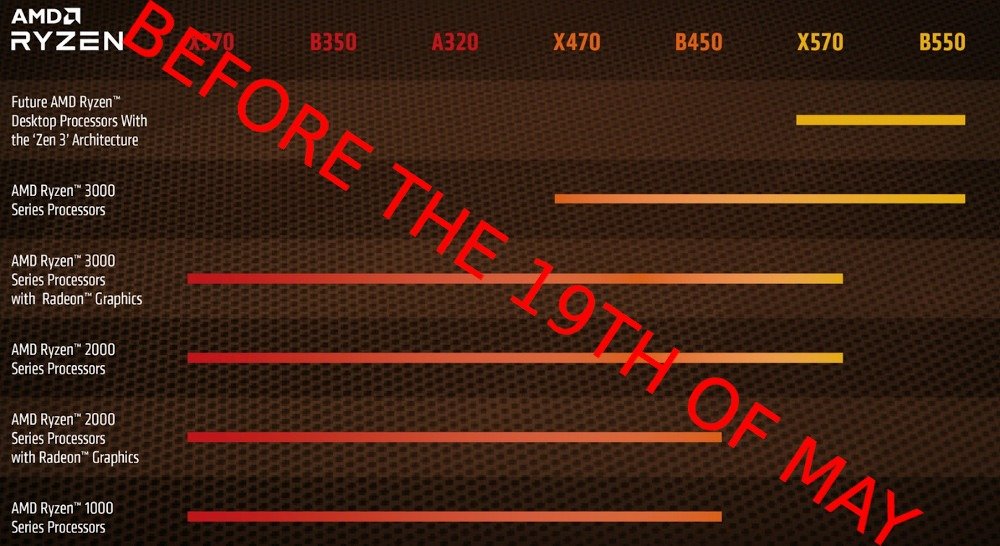 It’s important to be clear that AMD weren’t trying to screw their users. There’s a definitive technical reason, which AMD explained at the time;

“AMD has no plans to introduce “Zen 3” architecture support for older chipsets. While we wish could enable full support for every processor on every chipset, the flash memory chips that store BIOS settings and support have capacity limitations. Given these limitations, and the unprecedented longevity of the AM4 socket, there will inevitably be a time and place where a transition to free up space is necessary—the AMD 500 Series chipsets are that time.”

AMD said that on the 7th of May – how things change! Nonetheless, BIOS chip capacity was already a clear issue. MSI had to cut down their interface on B450 boards just to support Zen 2, never mind Zen 3. Alarm bells also rang as AMD announced X570 without support for Zen 1 processors.

What Changed – Technically, Nothing

Realistically, future products are never guaranteed. AMD could have let it blow over, and people would have got over it. AM4 still has better longevity than the two different versions of Intel Socket 1151 did. If AMD were Intel, X470 may have stopped at Ryzen 2000 series, with 3000 series requiring X570.

Nonetheless, AMD like to be the “good guy”, not the “less bad guy”. AMD also listened to the enthusiast community, as users made their feelings clear on various forms of social media. The feelings were, people were angry.

This doesn’t change the fact that the BIOS chips on B450 and X470 (and X570…) are simply too small to support all the generations of CPUs that are physically compatible with AM4. With the amount of microcode needed, it’s just not technically possible. That hasn’t changed overnight. All the technical problems still exist. To support Zen 3, it would be necessary to sacrifice older CPUs – likely including the ones these boards launched alongside.

Having boards floating around that don’t support the CPUs they launched alongside is not a situation AMD want. There’s also the problem that some users like to upgrade to the latest BIOS even if things are working fine. If a user with a B450 or X470 board and 2000 series CPU upgraded to a Zen 3 BIOS, they could brick their system. That’s not a good outcome.

What changed is the strength of feeling among users. AMD are walking a tightrope between people who may accidentally brick their systems, and people who feel wronged if they don’t get an upgrade path. With enough strong feeling among users, AMD have decided it’s worth the drawbacks. AMD have also come up with ways to make sure users know what they’re getting into.

As of today, AMD have announced that BIOSes will be developed for B450 and X470 motherboards that work with Zen 3 CPUs. That’s the good news. The bad news as we stated is that all the technical limits still exist. This means compromises have to be made.

Firstly, as part of the announcement AMD said “These optional BIOS updates will disable support for many existing AMD Ryzen™ Desktop Processor models to make the necessary ROM space available.” Just how many CPUs will be lost isn’t clear, and probably depends on the engineers. It’s possible the BIOS update will restrict the board to only Zen 3. If that happens, it’ll be because it’s the only way to make it work.

Secondly, the BIOS updates will be a one-way update. Returning to older BIOSes will not be supported. This isn’t uncommon for bios updates, though it’s not entirely clear why.

Thirdly, AMD plan to gate these updates behind verification. You’ll only be able to get them if you show you have both a Zen 3 processor and 400 series motherboard. This is to prevent people updating for the sake of updating and bricking their systems.

Fourth, AMD have noted that these updates won’t necessarily be available right away. When Zen 3 launches, motherboard manufacturers will have their hands full. There are only so many engineers and AMD likely want to be able to properly test these irreversible updates.

These aren’t just excuses. These are all consistent with a genuine technical problem that AMD are doing their best to overcome.

What Can We Learn?

Like many unfortunate situations, this one could have been avoided – if, when AM4 was first planned, AMD had already known what they know now. So the first lesson is that, if possible, AMD management should become clairvoyant.

Speaking more practically, however, it seems like the requirement for BIOS chips is only growing. Thinking about what a socket needs for longevity, it needs;

If longevity is a goal again in the future, it might be worth overbuilding on BIOS space. Larger BIOS chips do get pricey – a 128MB SPI flash chip is a little under £6 on its own from UK supplier RS, and 64MB chips aren’t much cheaper. These high capacity flash chips also require the use of extra chip select lines to access the full capacity. 16MB chips have a simple interface and cost under £1. The question becomes, is it worth an extra £5 per board to futureproof?

It’s also worth considering the length of upgrade cycles. Back in 2016 it was reported that users tended to upgrade every 5 or 6 years. That means for most people, even with a high-capacity BIOS chip and capable VRMs, there’s a good chance their new PC will use different memory technology anyway so a platform change will be forced regardless. Should those people have to pay an extra £5 for futureproofing they’ll never use?

Personally, I’m an enthusiast. I like to play with lots of different hardware, and I value the flexibility to run many generations of processors on a single motherboard. I’d love it if a future socket, maybe “AM5”, mandated much larger BIOSes. I’d happily pay £5 extra rather than £200-500 for another board. But a lot of people are in a very different position.

We’d love to hear from readers on this. Should AMD aim for bigger BIOS chips in the future? Is it better to save money and accept incompatibility? Let us know what you think in the comments below, on our Facebook page, or in the new Play3r Discord server.

6 iOS 10 Messaging and Game Apps Worth Having

Gavin Bonshor - Feb 13, 2017 0
As it happens every few months, Apple just released iOS 10.2.1, the latest upgrade to their awesome operating system. We thought that made this a good time to take a look at 6 iOS messaging and game apps that every iPhone user should have on their phone.
Go to mobile version
%d bloggers like this: