Today we are taking a look at the Genesis RX85 RGB Mechanical Keyboard. There are a plethora of RGB Keyboards on the market in 2021. Genesis marks their products towards gamers, so read on for more on what makes this keyboard stand out from its more well-known competitors. 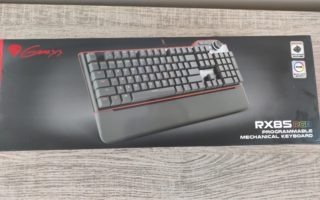 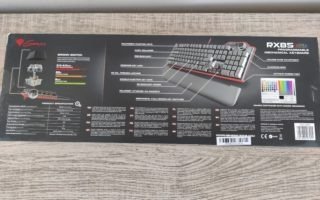 Unboxing the keyboard, it is well presented and more importantly well protected in its box. It looks smart and appealing and any gamer or RGB enthusiast will be drawn to the colours and features listed on the rear of the box. I just wish that in this day and age that the packaging could be recycled, but alas not possible with this box. 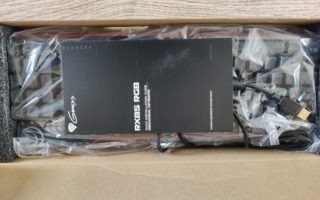 Inside the box apart from the keyboard itself is a small quick installation guide in a multitude of languages. Also in the box is a magnetic palm rest. This is a good feature as on most keyboards these tend to use cheap plastic clips which get destroyed by heavy users. It also means in the current Covid-19 climate, it’s easy to remove the palm rest, clean it and re-attach it to the keyboard. It’s comfortable, even after long periods of use. It doesn’t flex like most palm rests tend to either which is handy if you’re going to be typing on it all day. Especially if you already suffer from RSI or another similar condition. 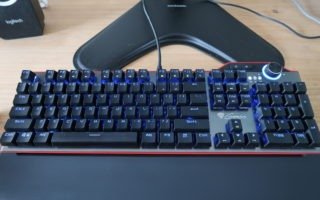 The keyboard itself is a nice combination of metal and plastic and has a very nice Red, Black and Grey colour scheme. Some people might not like the Red, particularly if they are after a certain colour scheme to match the rest of their setup. But it isn’t overbearing and didn’t bother me at all.

The keyboard itself is a US ANSI layout, we would like to hope that a UK layout becomes available, as a lot of people may be put off by this and Genesis may inadvertently be losing out on market share and a wider audience.

Now looking at the choice of switch in this keyboard. Genesis has gone for Kailh Brown switches, which means they aren’t as clicky as others, but it’s still clear you are typing on a mechanical keyboard. The keys themselves feel soft but easy to type on. It’s a full size 104 keyboard which I prefer massively over a Tenkeyless keyboard (meaning a keyboard that comes without the Numpad).

The other nice feature on this keyboard is the addition of a volume dial which means it’s easy to adjust sound output in a flash. If you press down on the dial it also mutes and subsequently unmutes the audio completely. Most keyboards require you to press the FN + corresponding F-keys to adjust the volume which can be problematic, especially if you’re using it in low light conditions. The only thing I don’t like about the dial is it’s easily removed, so if you have children or an overzealous pet, it may go missing quite easily. It would easily be a choking hazard too so I’d prefer this to be non-removable.

The RX85 also comes with N-key rollover which is an anti-ghosting feature for all keys. It also comes with a Windows key lock function which stops you from accidentally minimizing or exiting to the desktop. You can activate this by pressing the FN and Windows keys together.

Now onto the RGB itself. The keyboard has a 16 million colour range with PRISMO effect. It offers 20 lighting modes, 8 by default and up to 10 dedicated to games and 2 custom modes. You can alternate between the 8 default presets by pressing the sunshine-looking key next to the volume dial. The colours are nice and vivid and look better in low lighting conditions. There seems to be an ever so slight delay transitioning between different colours but I wouldn’t say this is a design flaw. It’s barely noticeable. Regardless a wide variety of different colour options mean this is RGB done right. 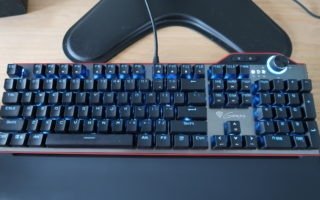 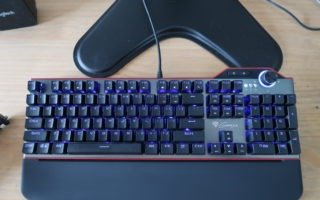 The other thing that stands out is the font on the keys themselves, it’s futuristic-looking but can take a moment for your eyes to adjust to the font when looking at it quickly. An example of this is the Caps Lock key. This is labelled as CSLK. The B and 8 keys look too similar for my liking. Luckily if you can touch type, this wouldn’t be too much of an issue but I’d prefer a more natural-looking font.

The RX85 RGB Gaming Software which can be downloaded from the Genesis website is where you can edit your various RGB lighting profiles and edit macro assignments. I found this a little clunky and there were no real instructions or tutorial on setting this up, although it’s basic enough to figure out just by playing around with the settings. It crashed once during early testing but since I wasn’t able to replicate this it may simply have just been a random bug. 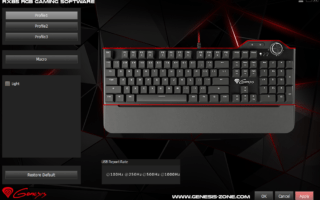 This review has left me with some unanswered questions about this keyboard. However, I am equally as pleased with it. It’s clearly a premium product aimed at gamers but I have been left scratching my head with some of the quirks I’ve found. However, it’s extremely comfortable to use, very responsive and I used it for typing this review with no real issues. It also took it for a spin in Battlefield and really enjoyed using it.

The quiet Kailh Brown switches are pleasing to the ears as the click isn’t too loud, which means it’ll fit well into any setup. Be that at home or the office and it shouldn’t annoy the family with the usual click-click noise of other switch brands. However, if you’re one that enjoys that click-click sound, then I would suggest looking at different switch options. The same applies to the US only layout. If you need a UK layout then this isn’t the keyboard for you. However, if you can touch type and confidently find your way around the keyboard it isn’t too much of a hindrance.

This is clearly a good attempt at an RGB/Mechanical Keyboard and would easily give some premium brands a run for their money. Although there are those quirks that we mentioned earlier, there’s more to like than dislike, so on this occasion, the Genesis RX85 RGB Keyboard earns it the Play3r Silver Award. 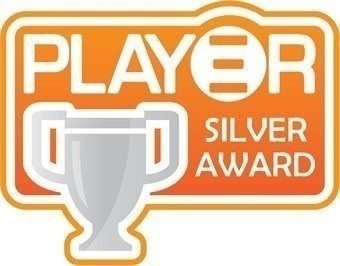 In the UK it’s hard to find someone who stocks the RX85 RGB, so if you’re wanting to get your hands on it, you will need to visit the Genesis Product Page here.

Thanks to Genesis for sending a sample of the RX85 RGB in for review.

Bo Pedersen - Aug 31, 2017 0
The Speedlink Fortus will have to live up to some strenuous use while managing accuracy and decent battery life as gaming sessions demand endurance.
Go to mobile version
%d bloggers like this: