EVGA have shown off their Z490 boards for Comet Lake: the Z490 Dark and Z490 FTW WiFi. While some manufacturers like ASRock and Gigabyte have a huge range on the platform, EVGA have boiled it down to just two. The Z490 Dark is a top-end board for extreme overclocking and the best possible performance. The Z490 FTW WiFi is a more modest board, and aims to be full-featured for a typical high-end build.

Interestingly, EVGA don’t seem to have gone for PCIe 4.0 readiness on their Z490 range. There’s no mention of it in the first-party article, and no sign of redriver chips on the photos of the boards. This won’t matter when running Comet Lake chips, which don’t support it anyway. Users who plan on upgrading to Rocket Lake will have to decide if PCIe 4.0 matters to them. 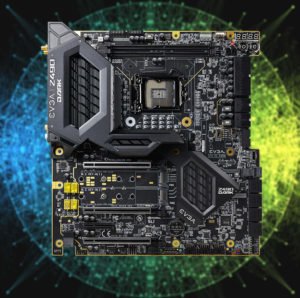 EVGA designed the Z490 Dark with a clear primary purpose. It exists primarily to set world records, using Intel’s 10th gen desktop CPUs and liquid nitrogen. As a result it has a monster VRM, 1 DIMM per channel memory, on-board controls and extensive diagnostics. The controls are out of the way of GPUs, and a U.2 port allows fast storage to be kept away from the extreme cold of an LN2’d GPU. Plus, there’s a “safe boot” button to quickly recover from unstable OC settings.

Nonetheless, the Z490 Dark is also a work of art. The socket is rotated by 90 degrees, and this does have the benefit that the CPU power connectors can be situated by the 24-pin. But it also harks back to the legendary DFI LanParty boards. The result is unique and striking.

Finally, the Z490 Dark is of course designed for the highest-performance systems day to day. EVGA back this up with Wi-Fi 6, Intel 2.5Gbps Ethernet, and a high-end audio section. The Dark also supports lights, with one regular RGB header and one addressable RGB header. 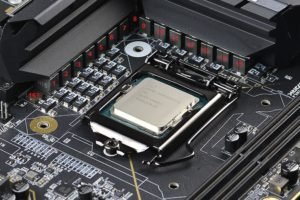 There is one awkward thing we must address. EVGA say the VRM is an 18-phase. There’s a slight problem with that – in the photo of the VRM EVGA shared, there are only 16 inductors visible in total. Every phase of a VRM needs at least one inductor. The very similar Z390 Dark is a “12+2+1+1”, and this is likely the same. That’s 12 phases for the core, 2 for iGPU, 1 for VCCSA and 1 for VCCIO. Maybe EVGA are also counting chipset and memory VRMs to make this up to 18. Even so, at 12+2 phases it’s still a very powerful VRM. 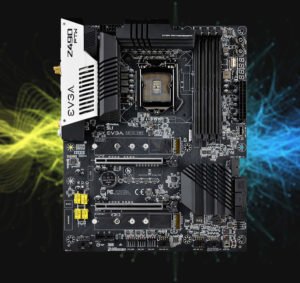 The Dark is great, but EVGA know most people considering a Comet Lake system aren’t going to be using liquid nitrogen. The EVGA Z490 FTW WiFi is designed for more realistic high-performance gaming builds. There are four memory slots rather than two, a more conventional layout, and a generally more modest design.

Despite the restraint, the Z490 FTW WiFi is full-featured. There’s Intel gigabit ethernet and Wi-Fi 6, EVGA’s high-end audio, and all the necessary slots and ports. The useful overclocking controls from the Dark, including a safe boot button, are preserved. Only having a single PCIe x1 slot, in addition to the two GPU slots, may disappoint some. In practice though, even that one slot is unlikely to be needed.

A final thing to note on the Z490 FTW WiFi is the RGB. EVGA have embraced the rainbow, and equipped the FTW WiFi with a dash of addressable LEDs shining through the chipset heatsink. Onboard RGB and ARGB headers are also still present. 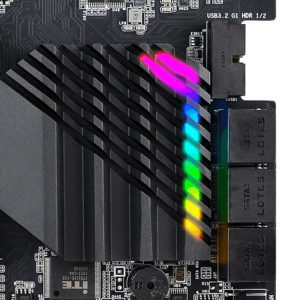 EVGA have declined to share availability, stating merely that the boards are “COMING SOON”. Other Z490 boards are set for launch on the 20th of May.